Our website uses cookies so that we can provide a better service. Continue to use the site as normal if you're happy with this, or find out how to manage cookies.
X
You are here
> Events
> Admiral of the Port's Challenge

Admiral of the Port's Challenge 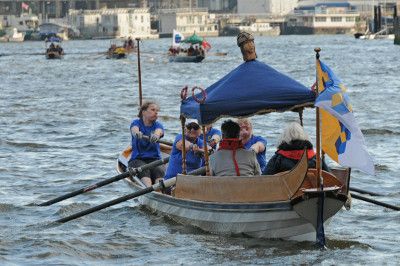 This race was inaugurated by the Lord Mayor to mark his dual role of Admiral of the Port of London. It is contested by traditional Thames Waterman's Cutters.

The Thames Waterman's Cutter is 34 feet long with a beam of 4 feet, 6 inches. In keeping with the concept of traditional rowing, it has fixed seats for up to six rowers and room for a cox and passengers. It is also simply adapted to the role of Ceremonial Livery barge with extra seating for passengers under a stern canopy. In this form the Cutter closely resembles the decorated craft often seen in historical scenes of the Thames in earlier centuries.

This event is raced from the Palace of Westminster to Westminster Boating Base, a distance of 1.33 statute miles. The rules require that the Cutters are rowed by four oars, must be rigged with their ceremonial canopies and flags, and must carry two passengers.

Such is the growth in popularity of Cutter racing (there are now more than 25 on the River) the race is often subject to a “staggered start”. The Cutters are set off in waves so their crews are not only racing against those in their starting rank, but also against the clock, as the winners are the crew that record the fastest time over the course.