Our website uses cookies so that we can provide a better service. Continue to use the site as normal if you're happy with this, or find out how to manage cookies.
X
You are here
> Events
> Greening Inland Shipping – One year on

Greening Inland Shipping – One year on

In Autumn 2019 we hosted London’s first Greening Inland Shipping conference. Just over a year on, we reconvened, online, to keep track of and update on the progress that has been made since.

The PLA hosted more than 150 guests at its Greening Inland Shipping webinar on 5 November where panellists described work taking place to reduce inland shipping emissions in the UK and elsewhere.

The highlight of the event was the PLA’s announcement of its net zero targets, to halve emissions by 2024 and achieve net zero by 2040, and the introduction of the Thames Green Scheme, to encourage operators to pursue green targets.

The first panellist was Edwin Pang, a naval architect, who gave an overview of environmental marine innovation. He described how Stena is recycling of car batteries to create quayside to enable the fast charging of electric vessels and said there were more than 60 other trials of zero emission ship technology and fuel production underway around the world.

Chester Lewis, a consultant with E4tech, described the work he had down with the PLA in creating their road map to net zero emission.

Dr Paul Hellier, a lecturer in engines and fuels at University College London described some of the qualities and complexities of biofuels and how they can help reduce emissions.

He was followed by our director of planning and environment, Jim Trimmer, who announced the PLA’s net zero plan before outlining the environmental benefits of using the river for freight.

Tanya Ferry, head of environment, introduced the Thames Green Scheme in which operators would be rewarded for their positive impact on the environment with Bronze, Silver and Gold awards.

The panellists then answered some of the more than 50 questions put forward before the PLA chief executive Robin Mortimer thanked everyone involved and highlighted some key themes. Robin emphasized the importance of coalition and partnership combating climate change, saying the PLA may take the lead in some initiatives but we were very much part of a global solution. Secondly, he focused on the need to find innovative ways to finance technological change as public finance may be stretched for years. “This is critical. None of this is going to happen unless we can find ways to make it cost effective along with business operations,” he said. Finally, Robin highlighted the need for urgency and making no regret investment decisions while all the new forms of green technology are tested and evaluated.

In the meantime, the PLA would be happy to collaborate with operators and interested parties in a working group to maintain the momentum towards a net zero port. “There is no time to delay. Some of the investment decision if we are going to achieve net zero by 2050 or 2040 the PLA ambition have to be made now, so we need to get on with it,” Robin said.

The recycling of car batteries to create quayside power banks is among the many green innovations in the maritime sector, according to Edwin Pang, a naval architect and consultant.

He told the Greening Inland Shipping audience how Stena is experimenting with new energy storage to enable the fast charging of electric vessels as part of his overview of recent developments.

He said there were at least 66 trials of zero emission ship technology and fuel production underway around the world aimed at reducing emissions of carbon dioxide and other harmful substances.

“In fuel production, there seems to be a bias towards hydrogen, although ammonia and methanol are catching up and there are lots of biofuel trials,” he said.

Pang went on to describe some of the projects incorporating wind such as Tharsis Sea River Shipping which plans to installing TwinFoil wind assist propulsion for a ship running between Duisburg and Goole and a 7,000 car car carrier, powered mostly by wind to be delivered next 2024.

He concluded that ports and operators needed to think about the safety aspects of new technology and alternative fuels, such as training firefighters and preparing spill response for alternative fuels.

Following his announcement of the PLA’s net zero target, the PLA’s head of planning and environment James Trimmer emphasised the Thames’ great potential in providing green transport. He described how a 1000-tonne barge can replace 100 lorry journeys and that it has half the emissions of road freight.

While the advantage of river transport for bulk has been long recognised, there is a growing recognition that light freight can be effectively transported by river.

“The river flows from the major international gateway ports in the east right into the largest conurbation and market within the UK and one of the largest in Europe,” he said.

“The opportunities that we have for the river in this low carbon approach in terms of light freight is something that there are trials underway now and others that we are aware of. This is the potential we see that the river can be used for this increased purchases and last mile deliveries.”

James later elaborated on last mile deliveries during the question and answer session, describing how recent increases in internet spending could combine with the desire for green deliveries to create an impetus to use the river for distribution.

“How we can tap that with the infrastructure we have got—to have rapid yet sustainable delivery is a great opportunity for logistics in the city. We know, and the river has been doing it for 2000 years, how to move stuff up and down the river with the tide extremely sustainably for bulk cargoes,” he said.

The City of London Corporation’s decision to move its produce markets to a riverside site in Barking presented a great opportunity for moving light freight in the future, he said. 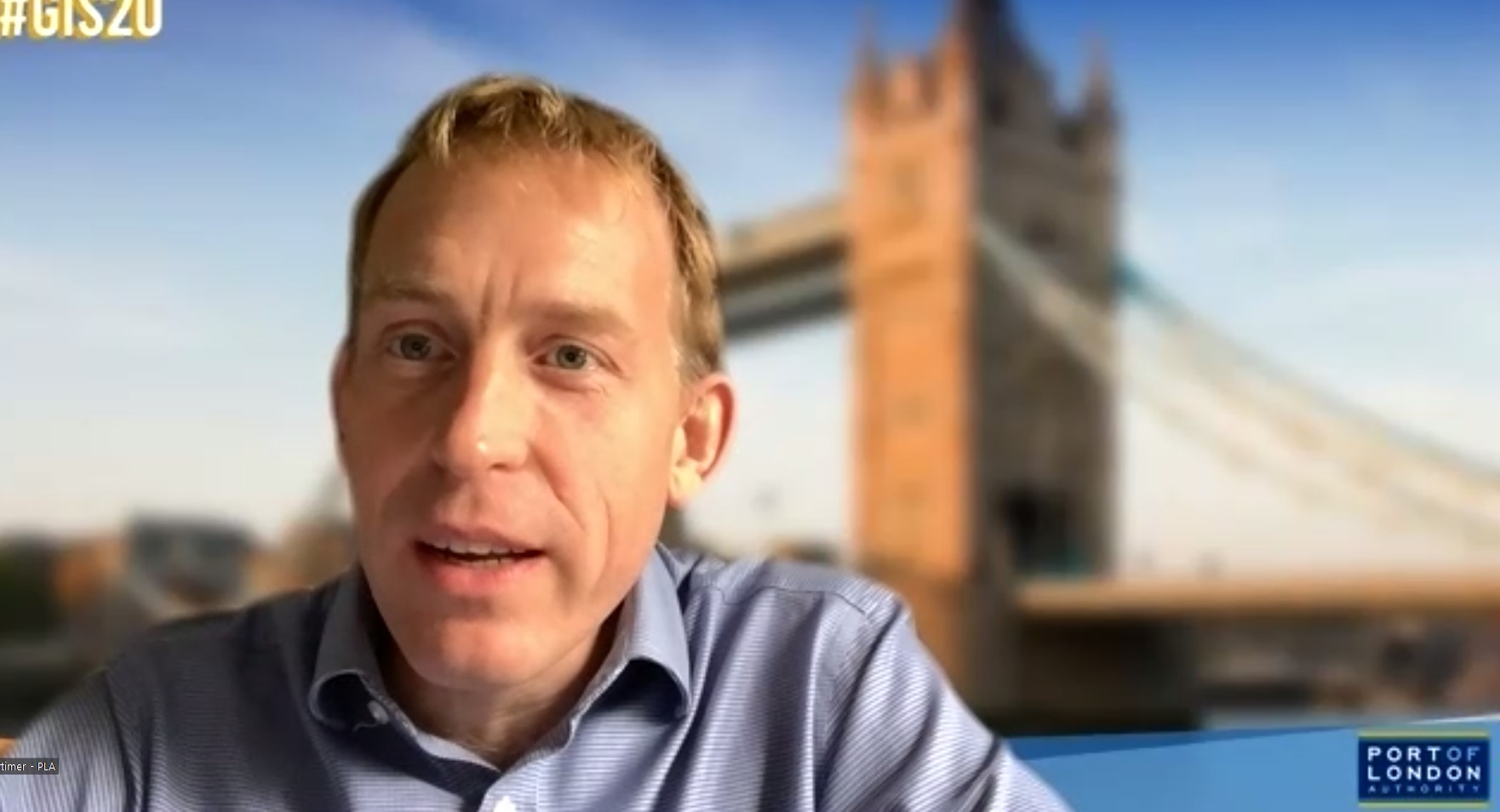 “We thought really hard about the timing of this and we are really aware of the difficult economic point, the day we go in to lockdown, a lot of Thames businesses are facing severe financial stress and so was now the right time and we decided to go ahead for two reasons.

There is no time to delay. Some of the investment decision if we are going to achieve net zero by 2050 or 2040 the PLA ambition must be made now, so we need to get on with it.

The second reason is because, we must see the recovery from this current economic downturn as a period of opportunity to do things differently and to look for opportunities for growth in more sustainable technologies and sustainable ways of doing things.

For both these reasons, we thought it was worth going ahead and I hope you all found it useful.

I’m going to pick up a couple of themes. The first is, a couple of people have spoken about coalition and partnership. Hopefully, here on the Thames we can hopefully be in the vanguard, in some areas we might be early adopters, in some areas we might be fast followers, but we are not acting alone. In the presentation from Edwin, which painted that global picture is important, so we are learning from elsewhere in the world and being part of a global solution and not seeing ourselves as doing something on our own.

The second point is cost. This is critical. None of this is going to happen unless we can find ways to make it cost effective along with business operations.

I do think public finance is going to have a role to play here so we need to be lobbying for public funding from the big sources like central government and the London authorities but they are going to be massively stretched for the next few years.

We need to find some innovative financing options and we can’t duck that because nothing is going to happen without the money and related to that is the need to look at things like incentives. The launch of things like our Thames Green Scheme will provide some data and we need to look to see if we can develop an intelligent incentive scheme off the back of something like that to try and encourage a step change towards moving towards new technologies.

And the final theme is around timing. There’s obviously a massive urgency and we can’t delay. It came out very much in some discussion around the road map. We need to be thinking about no regrets investment decisions. We know that not all the technologies are clear yet as to what is the ultimate solution. Things like biofuels can be an interim solution for some operators as the PLA is choosing to go down that route but we don’t know if the ultimate decision for every vessel is going to be hydrogen or ammonia so we need to be thinking about no regret investment decisions so we are not locked into technologies which prove to be the wrong ones."

10:00AM Welcome and introductions – Dr Tim Moonen, The Business of Cities

10:15AM Charting the path for cleaner inland shipping on the Thames – Chester Lewis, E4 Tech

11:20AM Emerging themes and conclusions