Our website uses cookies so that we can provide a better service. Continue to use the site as normal if you're happy with this, or find out how to manage cookies.
X
You are here
> Media
> News Releases
> MP visits Richmond Lock and Weir on its 125th Birthday

MP visits Richmond Lock and Weir on its 125th Birthday 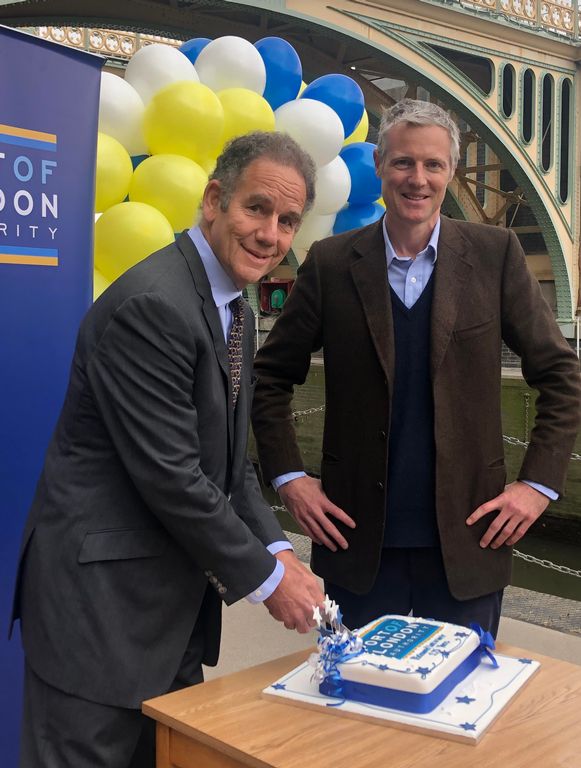 Exactly 125 years since it first operated, Richmond’s iconic lock and weir, spanning the River Thames, got a birthday visit today (17 May) by the local MP, hosted by the Port of London Authority (PLA).

The visit by Zac Goldsmith (Conservative, Richmond Park & North Kingston) coincided with confirmation by the PLA that to mark the anniversary the structure will undergo a refurbishment this summer, costing up to £500,000, to ensure it maintains its looks for years to come. This five-month project will involve 3,500 litres of paint, carefully sourced to meet specifications set by English Heritage.

This weekend (Sunday 19 May) marks the 125th anniversary of the lock and weir’s formal royal opening ceremony, performed by the Duke and Duchess of York. Its last major refurbishment, marking its centenary in 1994, was re-dedicated by the current Duke of York, Prince Andrew.

Situated at St Margaret’s between Teddington and Richmond, the facility includes three vertical weir gates, suspended from a footbridge, which are raised two hours either side of high water. For the rest of time passing river traffic must use the lock, measuring 76 metres in length and 7.9 metres in width.

During his visit Zac Goldsmith met PLA engineer Derek Maynard, who is in charge of this summer’s refurbishment work. Last year, Derek led a £60,000 renovation of the lock keeper’s cottage on the northern bank, now leased as the riverside headquarters of ‘Architect Your Home’, a local business run by one of its 2002 founders, Jude Tugman.

Zac Goldsmith said: “The birthday celebrations of this historic local landmark underline the importance both it and the river have had in the development of Richmond and London as a whole. It’s fantastic to see the PLA’s commitment to maintaining the structure will all the due care and attention it deserves.”

Robin Mortimer, chief executive of the PLA, said: “Richmond Lock and Weir has a long and proud history. Our employees based there continue to play a vital role in ensuring the river is safe and navigable. We look forward to many more years of it being in active service.”

The PLA has been responsible for the structure’s upkeep since the organisation was created by an Act of Parliament in 1909. The weir gates were operated manually until the 1960’s. The footbridge was the last on mainland Britain to levy a toll, with fees ending in 1938.

Hidden within the footbridge structure the three main weir gates each weigh 32 tonnes. They are 20 metres wide and four metres deep.

The summer refurbishment work will involve substantial scaffolding of the structure; the public walkways over the lock and weir will consequently be closed while the works are completed. Details will be publicised closer to the time.