Our website uses cookies so that we can provide a better service. Continue to use the site as normal if you're happy with this, or find out how to manage cookies.
X
You are here
>Getting back on the Thames Path

Getting back on the Thames Path 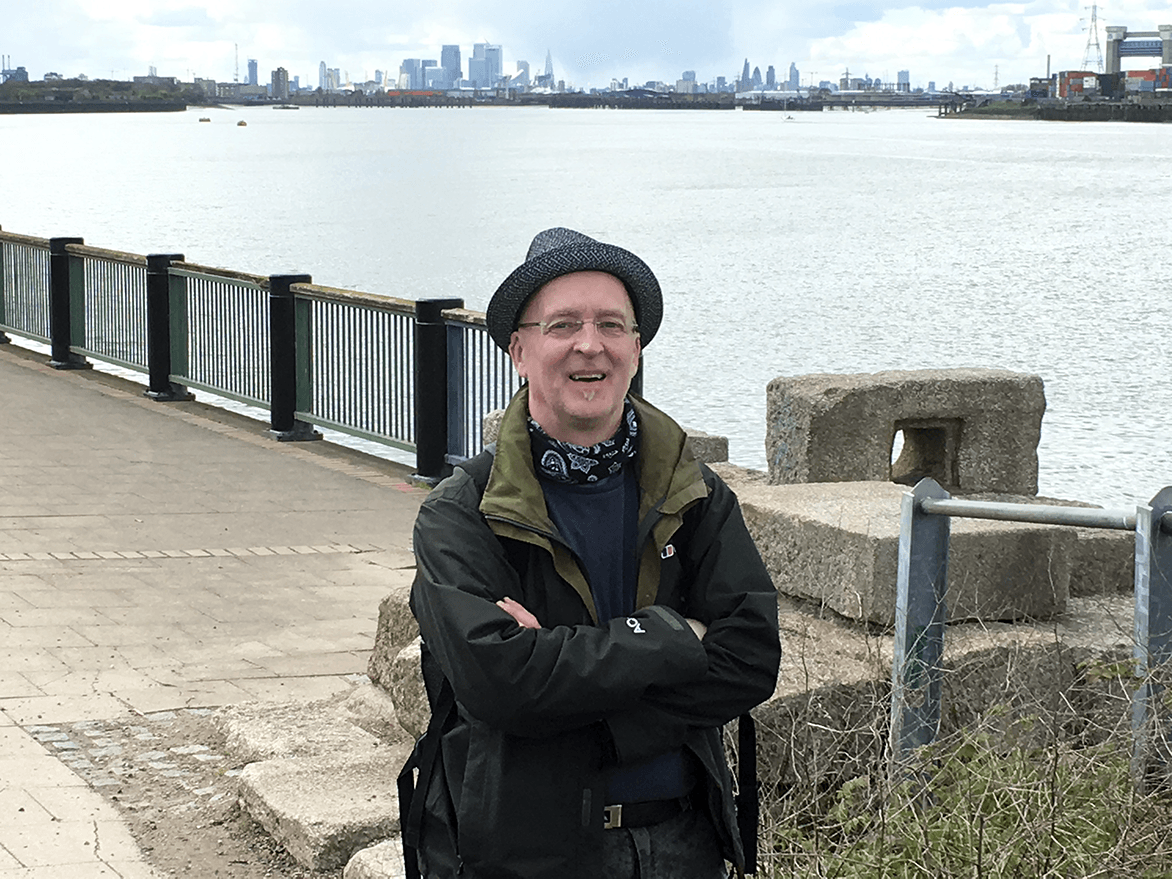 Spring is in the air and with the end of lockdown in sight illustrator, writer and walker David Fathers is looking forward to getting back on the Thames Path.

Where were you born and where do you live?

I was born in the north-east of England. After studying for a degree in graphic design in Newcastle upon Tyne Polytechnic, I headed south and have lived in north London ever since.

How many books have you published linked to the Thames?

After completing my first illustrated walking guidebook, The Regent’s Canal (Frances Lincoln), I proposed two further water-based guidebooks to my publishers, and both were accepted. One of the titles was The London Thames Path. The Thames Path seemed such a natural choice after the canal book. The other title was London’s Hidden Rivers. To date The London Thames Path is my best-selling book.

The London Thames Path is my main Thames book, though London’s Hidden Rivers and The Regent’s Canal all make reference to and drain into the Thames.

I was about ten years-old, when my parents brought me to London for a holiday. There is a photograph of myself with my mother and sister by the Thames just outside the Tower of London with warehouses and cranes visible on the south bank. This was the late 1960s, so by then most shipping activity in Pool of London Docks had ceased. The site with warehouses and cranes now occupied by the City Hall.

How many times have you walked the Thames Path?

I can’t begin to calculate the number of times I’ve walked the Thames Path. I like to take friends and family on walks along the river paths. There is always something new to see.

Have you been able to get to the Thames during lockdown?

I had planned a walk along the Thames from Kew to Teddington in April last year with some friends, but the first lockdown put paid to that.

What is it about the Thames Path that attracts walkers?

A walk along the Thames Path, away from the traffic is often peaceful and calm, and offers glorious views of London’s vast panoramas.

What about the Thames Path could be improved?

There are certain sections of the Thames Path that are closed to the public or where a riverside path simply doesn’t exist, for example on the western side of the Isle of Dogs and west of Queenshithe. I hope that these can be brought into the public domain sometime soon.

What is your favourite part of the Thames?

Without a doubt my favourite walk along the Thames Path is the stretch from Island Gardens to the Thames Barrier (it technically isn’t the Thames Path as it dips inland into the old royal docks – but there is no continuous riverside walk here. The walk takes in Trinity Buoy Wharf, Bow Creek, the Royal Victoria Dock and Pontoon Dock.  It’s is often very quiet and for most people who I take along this route it is usually there first experience of this part of London, even if they’ve lived in the capital for years. If I’m on my own I often carry a sketch book and draw the landscapes.

And your least favourite?

The former Deptford Royal Dockyard – it’s just a vast open piece of derelict ground by the Thames with a huge history. Created by Henry VIII, ships built here were involved in the Armada and the Battle of Trafalgar. But alas we have to walk the perimeter of the site and away from the Thames.

What three words would you use to describe the Thames?

What unusual sites have you seen along the Thames?

I consider myself very privileged to have descended twice into the Fleet section of the Bazalgette sewer, close to where it enters the Thames. At one point on one tour we could see the river begin to cascade over the enormous cast-iron sluice gate and into the sewer. Within an hour or so this sewer tunnel would be flooded. The engineering bricks that line the tunnels are in great conditions despite their age of 160 years.

Which part of the new public realm to be created by the Thames Tideway Tunnel are you most looking forward to seeing?

I’m looking forward viewing all the new public spaces that Thames Tideway Tunnel are creating. I’ll have to see them, as I’ll need to add them to the next edition of The London Thames Path.

When is you next book due to be published and what is it about?

My next book, Diverse London, is an illustrated walker’s guide into the history and culture of the major groups of immigrants who have made London their home over the past four hundred years. These are Huguenots, Jews, Afro-Caribbean’s, Chinese, Irish and South Asians. All the walks cover the issues each group found upon arrival in the capital and the positive contributions they have made. To be published by Bloomsbury in early 2022.