Our website uses cookies so that we can provide a better service. Continue to use the site as normal if you're happy with this, or find out how to manage cookies.
X
You are here
>Thames Barrier Alan 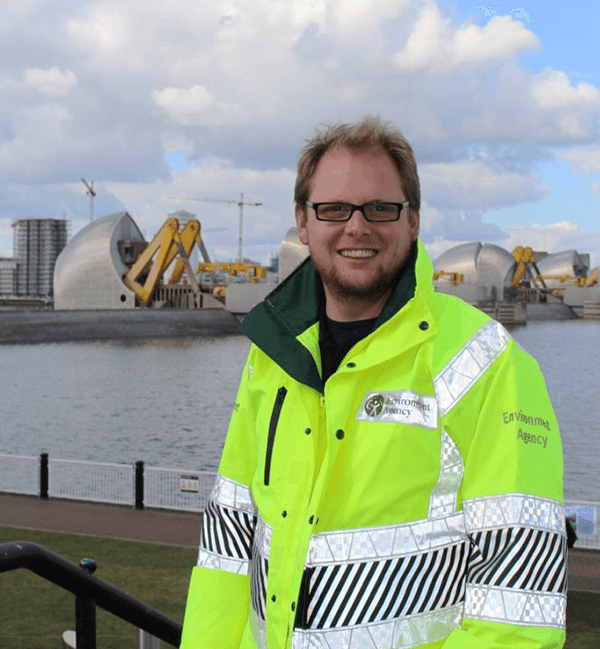 On 8 May 1984, the day HM The Queen formally opened the Thames Barrier, one of its current key staff had just turned one.  Here Alan explains its critical role in protecting the capital from flooding, 24/7.

“I’ve worked at the Thames Barrier for 12 years, the past six as one of five flood forecasters, running the control room, round the clock, every day of the year.

“I grew up locally and have a long-standing interest in the river.

“Literally the day after completing my Master’s degree in environmental management at the University of Hertfordshire, a post was advertised, based at the Thames Barrier, which primarily was to promote flood risk in London. Luckily for me, I’d just written 10,000 words on that very subject.

“Like everyone on the river, we are very proud of the role we have played in keeping the Thames operating safely over the last year, in extremely challenging circumstances.

“Although we’ve had reduced numbers of staff on site over the past year or so due to the pandemic, the five forecasters have manned the barrier throughout. Our engineers have also completed key maintenance work and kept the barrier operating safely. Fortunately, the rotas are now getting back to normal.”

“The Thames has a long history of tidal flooding.

“Even in Roman times, much of what we now refer to as the City of London was constructed on higher ground.

“Two significant events during the 20th Century brought the idea of the tidal barrier into the public mind-set. In January 1928, 14 people lost their lives when a high tide combined with very high river flows generated exceptionally high river levels in central London. Part of the river wall collapsed in the middle of the night, drowning people in basement flats.

“The near-miss of 1953, when large parts of East Anglia spared London from flooding, proved to be the catalyst for a tidal barrier to hold back extreme tides.

“Construction of the barrier started in late 1974, and it was operational by February 1982.

“Originally the barrier was due to be in place until 2030, but thanks to careful ongoing improvements and maintenance, we now expect it to remain operational until at least 2070.

“Revised climate change predictions and the increased risk of flooding mean plans are also in hand in for a second barrier, further downstream towards the coast. It’s a key part of the Environment Agency’s Thames Estuary 2100 strategy, to manage flood risk for the 21st Century.”

“We work a seven-day and seven-night rotation every five weeks, ensuring there’s always someone on duty, 365 days per year.

“There is no such a thing as a typical working day for us. No two tides are ever the same.

“We’re always monitoring the next few tides for any operational activity, whether that’s closing the gates, or issuing flood alerts for as far up river as Teddington.

“There’s plenty of liaison with our friends at Port of London Authority, who share a control centre overlooking the barrier with the Maritime & Coastguard Agency.

“We all work closely together to ensure that all vessels pass safely through the barrier, unaffected by any movements of the gates.

“Each gate is moved roughly once every two weeks, to avoid the hollow gates filling with silt.

“Nights are different to day shifts, however. Overnight we keep watch over all the monitoring equipment on the barrier and use the standby team to support if any serious fault needs rectifying overnight.

“Every time of year is different too. Winters can be hard – driving each way to and from work in the dark can be mentally tough. But it’s when we’re typically at our busiest, so the work is more interesting. Summers can be quieter, but we do get to see some amazing sunrises and sunsets.

“When I took over management of our Twitter account in January 2013 we had about 600 followers. I made a bet to run the length of the River Thames, if I got to 1000 followers by the end of that year – only to sail through it when we had the highest tide we’ve ever protected London against in the December. I’m yet to do the run. We currently have around 8,350 followers.

“Larger cruise ships prefer to use Delta span – the deepest part of the Thames at the barrier.

“This means we have to co-ordinate some of our larger maintenance projects outside the summer months. Such planning is carried out several years in advance in many cases.

“One foggy autumnal morning in 1997, a dredger crashed into the side of one of the piers, having been unable to correct its course after overtaking a slower vessel. Fortunately, apart from some paint damage, the structure was unaffected.

“We’ve seen an increase in the number of seals in recent years.

“I’ve been lucky enough to spot a couple, but they’re not easy to see from the seventh floor of the control tower.

“Porpoises have also been known to pass through the Thames Barrier, although I’m yet to spot one.”

“The site has been used many times for various film and TV productions.

“In 2007, the film Flood featured a number of scenes from the Thames Barrier. The under-river tunnels also featured in Mission Impossible 2.

“I also did catch Billie Piper from the office window during filming of Confessions of a Callgirl.

“An episode of Spooks was set at the Thames Barrier, and we’ve featured on Top Gear. And of course EastEnders during the end credits!”

Charlton or Millwall? Neither. I don’t do football.

What’s top of your bucket list? Run to work from the source of the Thames.

Hobbies? Don’t really have time for that! I play hockey in winter, when I can, although at a very poor standard!