Our website uses cookies so that we can provide a better service. Continue to use the site as normal if you're happy with this, or find out how to manage cookies.
X
You are here
> Media
> News Releases
> Naval Version of the Swiss Army Knife to Put on Show for Capital 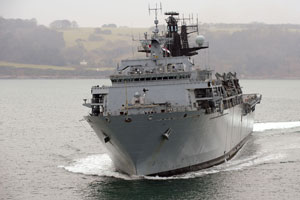 Royal Navy warship HMS Bulwark will visit the City of London from Wednesday, March 16th for the start of a five-day visit to the capital. Bulwark, one of the UK’s largest and most technologically advanced amphibious assault and command and control ship, will moor alongside at Greenwich.

Whilst in London, HMS Bulwark will host a number of visitors ranging from senior naval and Ministry of Defence officials, academics, business organisations plus local sea cadet units and London-based charities which the ship supports.

The main purpose of this visit, however, is to display her breathtaking capabilities. A capability demonstration – to take place on Thursday, March 17 between 9am and 1pm – will illustrate how the military, in particular the Royal Navy, can rapidly deploy in times of need, with a wide range of assets and skills. Demonstrations will include command and control aspects, military aid to civil powers, field kitchens, and medical and first-aid techniques.

It will also give the ship the opportunity to show off her hardware. The ship will be carrying a large variety of boats, land vehicles, amphibious landing craft and helicopters. The event will culminate in a dynamic demonstration both on and above the River Thames at Greenwich.

“It is fortunate we have found time in our busy generation programme to demonstrate to the people of London what we can deliver. My team can’t wait to show her off – in these uncertain times we are totally focused on our commitments to the nation’s interests and responsibilities and expect to be very busy once fully operational later this year.

“Though on this occasion, I regret we are not open to visits by the general public, I hope that as many Londoners as possible come down on the Thursday afternoon to Greenwich to witness what I’m sure will be impressive display.”

Following her visit to London, HMS Bulwark leaves the River Thames on Monday, March 21, to continue with her sea training in preparation for taking on her new role of UK Fleet Flagship and high readiness assault ship later this year. She will then return home to Plymouth for a short maintenance period at the end of March.

HMS Bulwark is one of the Royal Navy’s two assault command and control ships, a sister ship to HMS Albion. She has a ship’s company of 380, a quarter of whom are made up from 4 Assault Squadron Royal Marines. In addition, the ship can carry up to 200 marines in dedicated accommodation for long periods and another 500 in austere conditions for short periods.

Her flight deck can accommodate two Chinook or two Merlin helicopters. A large floodable dock holds four large landing craft – with another four carried on davits on the ship’s side.

The ship has just emerged from an 11-month upgrade and maintenance period by Babcock at its base port of HM Naval Base Devonport, Plymouth. This was the ship's first docking period since being formally commissioned into the Royal Navy in April 2005.
The £30m refit, 450,000-man-hour refit involved the overhaul of 1,625 items of equipment, the manufacture of 1,557 items, and the shipping of 398 tonnes of equipment on and off the ship.

215 hull valves have been removed and replaced, 93 tanks opened, cleaned and surveyed, 21 miles of electrical cable installed, and 8,000 litres of paint applied to the ship's outer hull.

HMS Bulwark now has improved aviation facilities (the flight deck has the capacity to operate two heavy-lift Chinook helicopters simultaneously) and upgrades to the floodable dock to float landing craft in and out, including full tactical night-vision capability for her landing craft and aircraft.

Extensive improvements have been made to the living quarters for the ship's 380 sailors and marines, including bunk spaces, toilets, bathrooms, recreational areas, main galley (kitchen), laundry area and dining area.

There were improvements to machinery and magazine spaces and IT network capability, as well as defensive weapons upgrades. The ship's outer hull was also treated with anti-fouling paint which will improve fuel efficiency and speed through the water.