Our website uses cookies so that we can provide a better service. Continue to use the site as normal if you're happy with this, or find out how to manage cookies.
X
You are here
> Media
> News Releases
> New campaign to record tidal Thames near misses

As Maritime Safety Week kicks off (6 July), the Port of London Authority (PLA) is calling on river users to make reporting tidal Thames ‘near misses’ a priority in its latest safety drive.

The PLA aims to reduce the number of serious incidents on the river, between Teddington Lock and the coast, by ten per cent year on year. In 2019, there were six such incidents, down from nine in 2018. In 2014 there were 41. 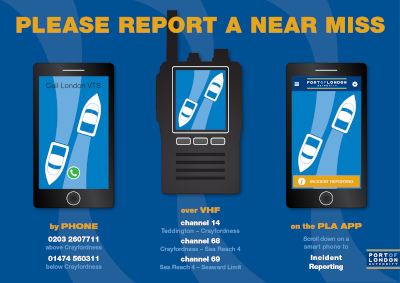 The campaign unveiled today, features a new set of posters, being promoted by the PLA via its website, Tidal Thames News online newsletter and its social media channels. They highlight the variety of routes river users can use to report incidents to the PLA.

Bob Baker; chief harbour master at the PLA, said: “Safety is the heart of everything we do at the PLA. There is no greater priority for us.

“The good news is that, in line with our Marine Safety Plan targets, we have seen a continuing downward trend in the number of serious incidents on the river since 2016.

“But there is no room for complacency. Our worry is that over the same period we have also seen a decline in the reporting of instances where there was a close call or ‘near miss’. Carefully recording all such incidents is essential to ensure the river is a safe place for everyone who uses it, for work or pleasure.

“Investigating and understanding the causes of all near misses is the key first step to preventing accidents occurring in the future.

“That’s why we need river users to get in touch with us, whenever near misses occur. This can be done via our VTS radio network, by phone, by email or via our app – it really couldn’t be easier.”

You can find the new posters on the PLA website here: http://pla.co.uk/Safety/Near-Miss-Reporting

The PLA’s latest safety initiatives include: