Our website uses cookies so that we can provide a better service. Continue to use the site as normal if you're happy with this, or find out how to manage cookies.
X
You are here
> Media
> News Releases
> New film celebrates extension of public access to unique river and docks archive

Public access to documents charting the history of the River Thames and London’s Docks over nearly 250 years has been secured for at least another decade - in a new agreement between the Port of London Authority (PLA) and the Museum of London.

To mark the milestone, the PLA has also issued a new YouTube film about its archive, housed at the Museum of London Docklands since 2003. The film has a diverse cast list, including: 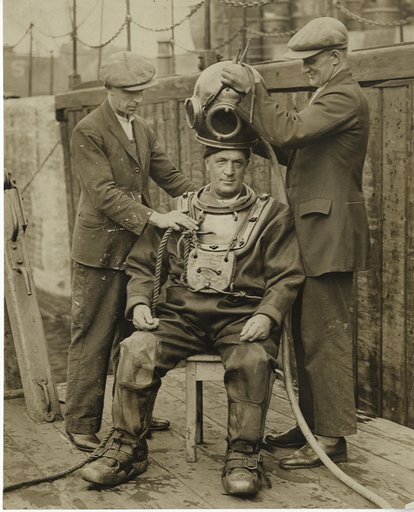 Also featured is a PLA diver from the 1930s in full protective gear, when their work regularly involved raising wrecks, as well as checking under water structures. Due to the murkiness of the river, they relied on solely touch rather than sight to find their way about.


Filling two kilometres of shelving, the archive details the work of the PLA and its predecessors from 1770. Parts of it are showcased in a permanent display at Museum of London Docklands on West India Quay, which depicts how the docks opened up trade routes around the globe, helping to secure London’s positon as one of the world’s richest and most powerful cities.

Members of the public can make appointments to inspect items from the archive that are of interest to them via portriverarchive@museumoflondon.org.uk.


One of the most popular parts of the collection, the photographic section, covers all reaches of the River Thames, as well as the enclosed docks of London.The historical dock trades of stevedores, lightermen, riggers, coopers and samplers are captured in the collection, as well as the work of police, office staff and the port’s own rat catcher, assisted by his dog.
Among the more unusual and macabre objects on show at the museum are a mummified cat and rat, discovered in London Dock, near Wapping, in the 1890s.

Gary Surridge, head of partnerships at the Museum of London, commented: “This extension of our long-standing relationship with the PLA is fantastic news, securing the future of this hugely important archive as a professionally-managed resource that is accessible to all.”

The PLA’s new film is presented by Fiona Keates, the archivist whose work to manage the collection is also funded through the extended partnership. She was appointed at the end of 2017, a year that saw the museum handle a record 400 enquiries about the collection, and is expecting 2019 to be busier than ever. Fiona said: “The archive’s rich content is an invaluable resource for a growing number of parties – ranging from students and academics, researching the social, economic, maritime and engineering history of the capital, through to amateur family historians, tracing their ancestors’ roots.”

Robin Mortimer, PLA chief executive, added: “The immense scope of the archive – from the magnificent early drawings sketching out the docks’ design, through to insights into the day-to-day lives or ordinary dock workers and residents − make it a unique collection of international significance. “It’s everyone’s history, so it’s great that the collection continues to be readily available to all Londoners, as well as interested parties from near and far.”

The PLA and the Museum of London Docklands are also considering a possible major new exhibition to showcase artefacts from the archive that have never previously been put on public display.

ABOUT THE PORT OF LONDON AUTHORITY

• The PLA works to ensure navigational safety along the tidal Thames, sharing its marine, environmental, planning and other expertise to promote use of the river and safeguard its unique marine environment.
• The tidal Thames is one of the UK’s busiest waterways and is home to the country’s second biggest port by tonnage of goods handled.

ABOUT THE MUSEUM OF LONDON

• The Museum of London tells the ever-changing story of this great world city and its people, from 450,000 BC to the present day. Its galleries, exhibitions, displays and activities seek to inspire a passion for London and provide a sense of the vibrancy that makes the city such a unique place. The museum is open daily (10am – 6pm) and is free to all. The Museum of London’s online collection covers 90,000 objects, with more being added: www.museumoflondon.org.uk.