Our website uses cookies so that we can provide a better service. Continue to use the site as normal if you're happy with this, or find out how to manage cookies.
X
You are here
> Media
> News Releases
> PLA backs Cleaner Thames push with single-use plastic commitment

The Port of London Authority (PLA) has announced plans to stop using single-use plastics by World Ocean Day (8 June, 2018) as part of its continued campaign to reduce the amount of rubbish in the Thames.

Along with several other high profile organisations who have made this pledge (including Buckingham Palace and the National Trust), the PLA is working to remove all single-use plastics from its organisation. The harm that plastics are doing to the environment is high on the news agenda; the issue has been pushed more into the public consciousness through Sir David Attenborough’s Blue Planet II programme and images of the catastrophic impact plastic waste is having on marine wildlife. 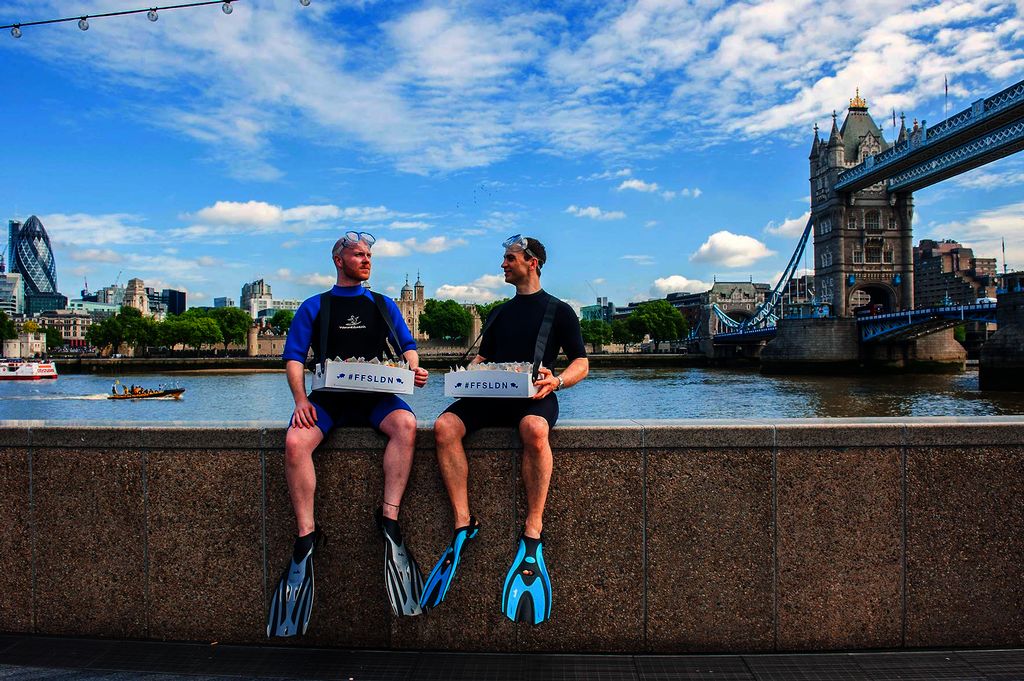 This move by the PLA reinforces their work on the ‘Cleaner Thames’ campaign, fronted by world famous explorer Paul Rose. Cleaner Thames’ aim is to persuade Londoners and Thames river users to change their behaviour, bin their litter, recycle more and ultimately reduce the 300 tonnes of rubbish found in the river each year. Last summer, environment charity Hubbub had ‘frogmen’ on the riverfront by Tower Bridge as part of Cleaner Thames, reminding visitors to bin their rubbish properly in the ‘For Fishes Sake’ #FFSLDN initiative.

Whilst removing single-use plastics in the PLA’s offices is straightforward, achieving this goal in other PLA work places is not so easy, not least for the crews on board more than 30 different vessels that the organisation operates while patrolling and maintaining the Thames.

Environment manager Tanya Ferry explains: “We have spent the last six months examining where we use plastic and how we can reduce it, and eliminate single-use plastic. Initiatives so far have included the removal of plastic cups and single-use plastic cutlery in our offices; and the change from single-use large plastic water cooler bottles to refillable mains-supplied bottles.

“However, many of our people work out on the river or in remote locations like the Thames Barrier, so to go single-use plastic free here is quite a challenge. On hydrographic vessels for example, our teams can be away from land for significant lengths of time. With these staff, we are trialling a bottle with its own filter which removes well over 99.9% of contaminants and can be used to filter up to 130 litres of water.

“The staff fill their bottles from a large water tank on board, which is filled from the mains on land. As these tanks can stay in place for some time, it’s important our teams can guarantee they can continue to drink safe water that tastes OK. These filter bottles do just that! If this trial is successful, we will look to adopt these for all our vessel-based staff with each filter bottle enabling us to replace over 200 single-use plastic water bottles.

“By finding solutions like this, we hope to demonstrate that whilst it can be challenging for organisations to be single-use plastic free, it is possible, and the PLA is committed to making it happen.”

Cleaner Thames advocate, Paul Rose said:“I’m lucky enough to travel the world in the work that I do. In recent years there’s been one clear theme blighting the marine environment and habitats: plastics. I see waste plastics virtually everywhere I go, from the warm water around tropical islands, to the frozen waters of the Arctic. That’s why I was so keen to join up with the PLA on the Cleaner Thames campaign.

“It’s great to see the PLA stepping up again and banning single use plastics in their own operations. We need to see more companies taking a stand and doing the same. Together, we can and will make a difference.”

The PLA has partnered with water filtration system company, Water-to-Go, to provide specialised bottles to the crews of their vessels. Founder, David Shanks has donated the bottles for the trial. He commented:

“Single-use plastic bottles for water are a blight, wherever you go in the world. Our bottles provide everyone with the chance to access clean, filtered, water on the go.

“I’m delighted to see them being used on port authority vessels on the Thames. If our assistance can help the PLA achieve its single-use plastic free goal, it’ll be a great and noteworthy result.”

This plastics-free commitment from the PLA supports its sustainability strategy which includes carbon footprint reduction; energy efficiency and pollution prevention. Last year the organisation launched two Thames firsts – a Green Tariff offering discounted charges for ship operators whose vessel calling on the river have lower emissions; and the Thames Air Quality Strategy, which takes an overview of the current status and sets targets for improvement through a five-year action plan.