Our website uses cookies so that we can provide a better service. Continue to use the site as normal if you're happy with this, or find out how to manage cookies.
X
You are here
> Media
> News Releases
> Secretary of State for Transport visits DP World London Gateway 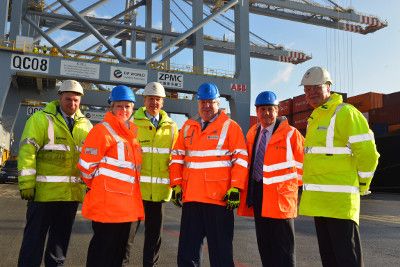 The Secretary of State for Transport, Patrick McLoughlin MP, visited the state-of-the-art port with local MPs. He climbed one of the world’s tallest quay cranes to view the location of the new berth which will increase deep-sea access for ships carrying UK imports and exports.

The location of the DP World London Gateway Port, which has 16 million consumers within 50 miles, enables imports to enter the UK closer to where the goods will be consumed.

Bringing ships closer to key areas of consumption such as London, Birmingham and Manchester, reduces the need to truck goods many miles inland, thereby removing unnecessary supply chain costs. In addition, rail services from the port now call at 11 destinations across the UK, offering a highly efficient alternative to road freight.

The Berth Three announcement will enable the use of an additional 400 meters of quay length with a dredged depth of 17 meters alongside. DP World London Gateway port can easily handle the largest container ships and has developed innovative technology to ensure the port remains open in bad weather.

Contracts have been awarded to VolkerFitzpatrick for civil and electrical works and four new quay cranes have been ordered from ZPMC. The third berth is planned to be operational in the second half of 2016. 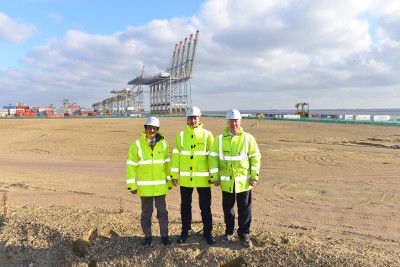 Secretary of State for Transport, Patrick McLoughlin MP, said: “The continued expansion of London Gateway Port proves Britain is a country where companies want to invest.

“The new third berth announced today will create many new jobs and is a signal that the UK maritime sector is continuing to grow. The maritime sector directly contributes £14 billion to our economy every year and supports more than a million jobs.‎

“Having visited the port I have seen for myself what a fantastic piece of infrastructure it is and the opportunity that exists for even further growth and expansion at this site.

“Putting in place the right foundation to allow businesses like DP World to prosper in the UK is part of the government's long term economic plan.”

DP World Vice Chairman, Jamal Majid Bin-Thaniah, said: “Since opening, DP World London Gateway has continued to attract more shipping line services and we remain committed to increasing speed and efficiency in supply chains. Today’s announcement is good news for our customers who are at the heart of everything we do.”

DP World London Gateway, CEO, Simon Moore, said: “As the port continues to win new business, we are now announcing Berth Three in-line with our customers’ needs and we are delighted the Transport Secretary was able to visit the port and see for himself the facilities and infrastructure we have created to reduce supply chain costs.”

He continued: “This is a very busy time for the team and I would like to praise them for their achievements. On Friday, last week, we welcomed the Global CEO for Prologis, Hamid R. Moghadam, and launched our 316,000 square foot joint venture distribution centre, which will be ready for occupation later this year.

“The DP World London Gateway Logistics Centre, our Common User Facility, is also on track to open in Q2 this year and we are in advanced negotiations with several more clients for the Park.”

Pentalver, the leading container solutions company, is also constructing a new facility which will open soon.

“Our ability to compete with other UK ports is now well proven. We will continue to attract more services and deliver world-class efficiency, at less cost.”

The port's location, with its superior operational systems and service, ensure ships load and unload as fast as possible, making London Gateway a world class asset for the UK.