Our website uses cookies so that we can provide a better service. Continue to use the site as normal if you're happy with this, or find out how to manage cookies.
X
You are here
> Media
> News Releases
> Thames Clean up plan launched on World Oceans Day

Today, World Oceans Day (8 June 2018) sees the launch of a Litter Strategy for the Thames – a major campaign aimed at tackling the scourge of rubbish, particularly plastics, in the UK’s most famous river.

The Port of London Authority (PLA) is coordinating the Strategy as chair and founder of the Thames Litter Forum, which it established in 2014 with support from Thames Estuary Partnership. The Forum sees non-governmental organisations, university researchers, river operators, businesses, industry bodies and others working together to chart the best approach to clean up the Thames. Organisations involved include: foreshore clean up charity, Thames21, ZSL, King’s College London, the British Plastics Federation, Royal Yachting Association, Greater London Authority and many more.

The Thames Litter Strategy comprises four key components: establishing a ‘baseline’ picture of the current situation with Thames litter; combatting litter pathways into the river; removal of existing litter; and changing behaviours through education and outreach. The Strategy links to the ‘Thames Vision’ the PLA’s 20-year development framework for the river, developed with stakeholders and launched in July 2016, which targets growing river use, alongside an improving environment. 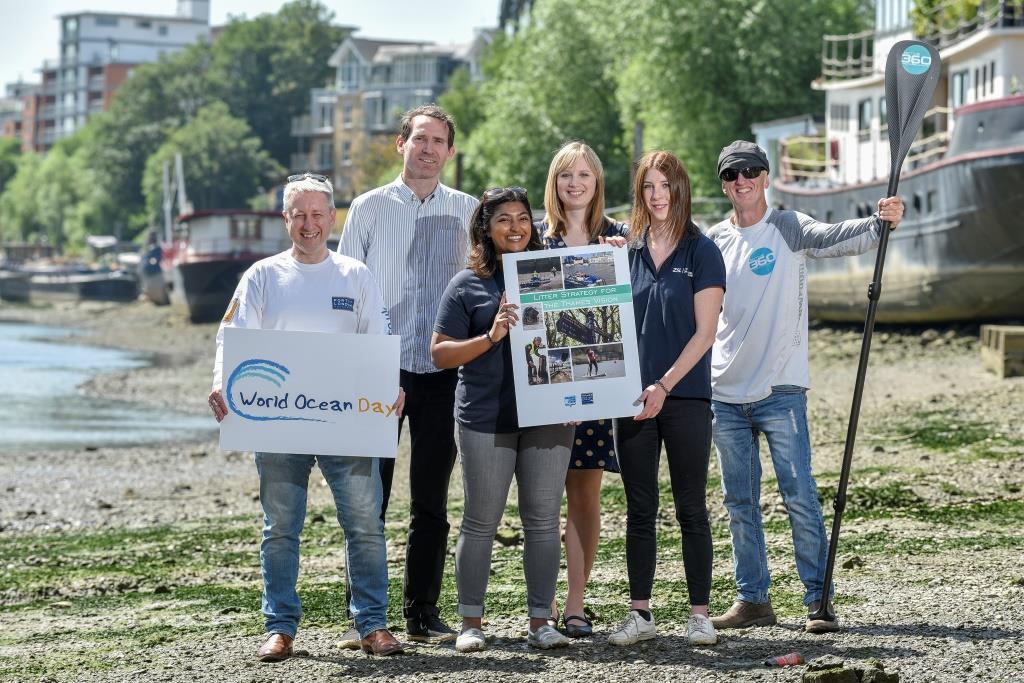 The PLA’s Thames Vision director, Alistair Gale said: “The launch of the Strategy is a really important step in cleaning up the Thames. As a group we’ve become skilled at cleaning up the rubbish that we can see on the foreshore and that we trap in our passive driftwood collectors, but this takes us further – looking to scope the full scale of the problems and tackle the root causes of how rubbish ends up in the Thames. It’s about moving the focus to prevention, alongside cure.

“The plan is launched on World Oceans Day (8 June), which this year focuses on preventing pollution and encouraging solutions for a healthy ocean. As a coastal city, the Thames is our gateway to the oceans, bringing the sea into the city twice a day through the tides. By cleaning up the Thames we’re doing our bit for healthier oceans.”

Helen Jordan, sustainability issues executive from the British Plastics Federation (BPF) says: “As a member of the Thames Litter Forum, we look forward to continuing to help deliver the Litter Strategy for the Thames Vision. The strategy’s focus on both preventing litter from reaching the Thames as well as removing existing litter will help ensure it has maximum impact. A key goal of the BPF is to minimise plastic entering the sea from the UK and we view this Litter Strategy as an important part of this work.”

Since being declared biologically ‘dead’ in the 1950s and 60s the Thames has made a remarkable recovery to become one of the cleanest metropolitan rivers in the world. It provides a diverse range of habitats for many species of fish, birds, seals and other wildlife. But litter is one of the major challenges to maintaining and improving the Thames environment. Up to 300 tonnes of debris is recovered from the river each year, with around 47% of that being food and drink packaging.

The Litter Strategy builds on initiatives which have already targeted the Thames such as the PLA’s Cleaner Thames Campaign, fronted by the world-famous explorer Paul Rose; For Fish’s Sake run by the Hubbubb Foundation to encourage litter pick up and more use of bins; and the #OneLess campaign led by the Zoological Society of London which aims to make London single-use plastic water bottle free.

Paul Hyman from stand up paddle board organisation, Active 360 said: “We’re taking people out on the Thames every day. They love the experience of being out on the water and closer to nature. And they’re all devastated at the state the river is in. We see everything from plastic bottles to fast food cartons, plastic beer cups to straws and plastic bags. Our “Paddle & Pick” blitzes on litter are proving really effective, with the recent event near our Kew Bridge base making a real difference.”

You can read the Thames Litter Strategy on the PLA website here: www.pla.co.uk/Environment/The-Thames-Litter-Strategy

New members and initiatives are invited to add support and data to the Thames Litter Forum and Strategy, via the PLA website or email cleaner-thames@pla.co.uk