Our website uses cookies so that we can provide a better service. Continue to use the site as normal if you're happy with this, or find out how to manage cookies.
X
You are here
> Media
> News Releases
> Thames Skills Academy milestone as 22 new apprentices embark on training 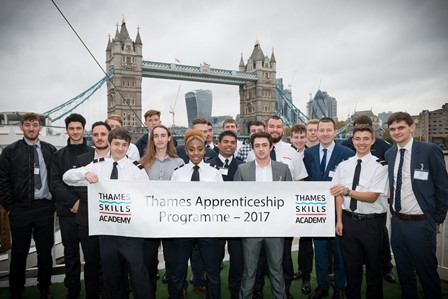 Twenty two apprentices this week celebrated the start of their journey towards careers on the tidal Thames, at the official launch of the Thames Skills Academy’s (TSA) Thames Apprenticeship Programme.

The group is the first to embark on TSA-managed apprenticeships and includes young people employed by river operators including Livett’s Group, City Cruises, MBNA Thames Clippers, Cory Riverside Energy, the Port of London Authority (PLA) and Thames Shipping. The 16 deck apprentices are working towards combined Level 2 Diplomas in Maritime Studies/Boatmaster’s Licences, through a course delivered by Red Ensign Training in conjunction with Eastleigh College; and the six engineering apprentices are undertaking a bespoke Level 2 marine engineering course, delivered by Mid Kent College.

The first cohort of ten deck apprentices has just returned from their first three weeks of training, with Red Ensign on the Isle of Wight, where they undertook their induction programme, including basic marine safety training.

At the event on board the passenger boat, Dixie Queen, Institute for Apprenticeships (IFA) board member and principal guest, Paul Cadman, said:

“This is a really important day, not just for these young people, but for the wider Thames community. It’s fantastic to see the strength of industry backing for training on the Thames. I’m particularly pleased to see six engineering apprentices starting their studies in the run up to the start of the Department for Transport’s year of engineering, in 2018. As long as I’m still on the Board at the time, I’d be delighted to return to present the apprentices with their IFA certificates on successful completion.”

The amount of activity on the Thames is growing markedly across trade, travel, inland freight and sport. In 2016 the Port of London was the fastest growing UK port, the number of passenger trips reached a new record and inland freight tonnages topped three million tonnes as the river gets set for huge activity around the construction of the Thames Tideway Tunnel.

PLA chief executive, Robin Mortimer welcomed the trainees to the Thames. He said: “Use of the Thames is set to grow massively over the coming years, that’s something we’ve established through the development of the Thames Vision through 2015 and 2016. The apprentices we see here today will be the Thames skippers, deckhands and marine engineers of the future. That’s hugely important, but as important is that next year, there will be a further group starting training, and in the following years.” 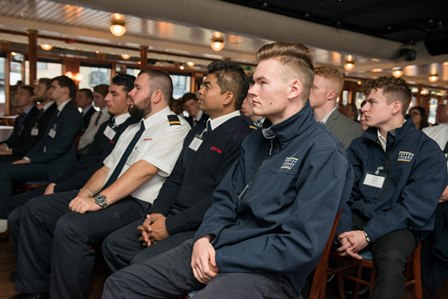 The Thames Tideway Tunnel is one of the main projects that will drive increased use of the river over the next decade. The £4 billion project will upgrade London's sewerage system to cope with the demands of the city well into the 22nd century through the construction of a new 25 kilometre long tunnel below the river. Over four million tonnes of materials will be moved on the Thames during the project.

“We have two main jobs to do as an organisation: to build the Thames Tideway Tunnel that will help make the Thames clean again; and rebuilding people’s connection with the river,” commented Tideway asset management director, Roger Bailey. “There can be no stronger connection to the Thames than working on it. So while I fully expect to see some of these young people working on vessels at our construction sites over the next five years, the important thing is that their skills will endure long after our project is completed. That’s a legacy of which we can be truly proud.”

The TSA is the recently established Group Training Association for marine sector employers on the tidal Thames. It was set-up in 2016 and is supported by Tideway, the PLA, Transport for London and the Company of Watermen & Lightermen. Fifteen river operators are already members of the TSA and many of their trainees are in these first three groups of apprentices.

TSA chief executive officer, Julian Parkes, added: “Today is an important milestone for the TSA. It puts us properly on the map. And the great thing is that there is more to come. Yes, we will be putting more young people through apprenticeships, but we are also working with employers and youth organisations to raise awareness of the many and varied job and career opportunities that exist on the River.”

About the Thames Skills Academy

About the Institute for Apprenticeships (IFA)