Our website uses cookies so that we can provide a better service. Continue to use the site as normal if you're happy with this, or find out how to manage cookies.
X
You are here
> Media
> News Releases
> Thames foreshore by Gabriel's Wharf named Ernie's Beach 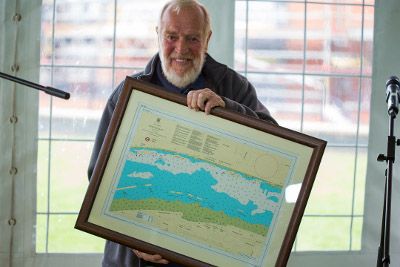 From his daily walks with his dog along the foreshore in the 1960s and 70s, Ernie became an expert in the archaeology and history of the river. He also became a tireless campaigner against the “reclamation” of the foreshore as property developments replaced former dock activity.

“I was born in Wapping Hospital in 1931, yards from the river, to the sounds of the tide, barges clinking and the smell of the spices” says Ernie. Ernie and his brother spent time on the foreshore as kids and remember swimming in the river by Tower Bridge. “I moved from the east end to Waterloo and was looking for somewhere to walk my dog. There were no parks but there was access to the foreshore. Slowly more of the foreshore was being reclaimed by developers and public access removed. People had turned their backs on the river.” 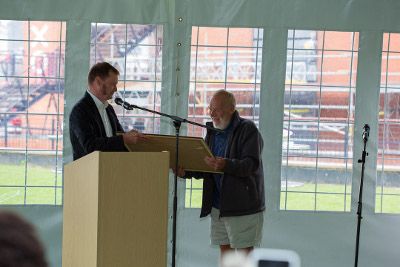 In the late 1970s as a Waterloo resident, Ernie joined the Coin Street Action Group campaigning for affordable housing, open space and leisure uses for this part of London’s South Bank. He was also involved in the public inquiry for Hay’s Wharf by London Bridge. “I told the inquiry the river should for leisure and pleasure.”

Thanks to Ernie Coin Street Action Group campaigned to save the existing river wall and beach and persuaded the Greater London Council to drop its requirement to build out to ‘the Port of London Authority line’. This has resulted in the sandy ‘bay’ that can be seen today and is now being named Ernie’s Beach.

“Not many people can truly say ‘I changed the course of events’ but this beach is a living testament to Ernie's efforts over many years” says George Nicholson, Treasurer, Coin Street Community Builders and Chair, London Rivers Association 1987-2007. “Today’s announcement is a fitting tribute to an individual who has influenced how Londoners and visitors to London perceive and use the river today. We are delighted the Port of London agreed to the naming of Ernie’s Beach, and that we are celebrating this during Totally Thames, a month long season of river-related activities,” adds George.

Ernie has lived in the local area for 50 years and until recently was a regular mud lark on the foreshore. A printer until retirement, Ernie was a founder member of CSCB and also served on the boards of other local community organisations including Blackfriars Settlement, Waterloo Community Development Group and Association of Waterloo Groups. Ernie is lifelong President of the Colombo Centre.

Coin Street Community Builders is a social enterprise and its aim is to make our neighbourhood a great place to live, work in, and visit. Colin Street has transformed a largely derelict 13-acre site into a thriving mixed use neighbourhood by creating new co-operative homes, shops, galleries, restaurants, cafes and bars; a park and riverside walkway; sports and leisure activities, by organising festivals and events, and by providing childcare, family support, and signposting to training and employment www.coinstreet.org

Port of London Authority advice on foreshore access. The Thames foreshore is potentially hazardous and some dangers may not be immediately apparent. The Thames rises and falls by over 7m twice a day as the tide comes in and out. The current is fast and the water is cold. Anyone going on the foreshore does so entirely at their own risk and must take personal responsibility for their safety and that of anyone with them.