Our website uses cookies so that we can provide a better service. Continue to use the site as normal if you're happy with this, or find out how to manage cookies.
X
You are here
> Media
> News Releases
> Breaking the hound Barrier – dog rescued at Thames’ flood defence

A dog that swam through the THAMES BARRIER lived to tell the tail after being rescued by the Port of London Authority (PLA).

The feisty Jack Russell fell into the Thames and somehow paddled his way through the central gate of the world-famous flood defence, before being scooped out of the water by a PLA boat.

Guy Underwood and Kevin Reynolds of PLA tug Impulse had just started a morning shift (10/5) near the barrier when they spotted a stunned dog walker shouting and gesturing at the Terrier, named Russell, who was powering his way through the Barrier towards Tate & Lyle Sugars.

The PLA pair leapt into action, launching the authority’s small work boat Dory, before lifting two-year-old Russell to safety. They got him back to the foreshore and although barely able to stand from exhaustion, he seemed right as rain.

Guy said: “We got to work thinking a person had fallen in and had no idea it was a dog. How he was able to get through the barrier and so far to the other side of the river – I have no idea. I dare say most humans wouldn’t have got that far. He’s a bit of a superdog.” 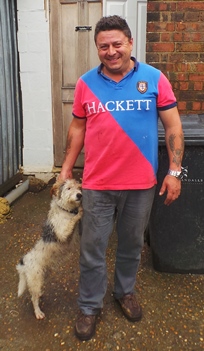 Russell’s owner John Pedro, who works at a skip hire firm about half a mile from the Thames Barrier, was overjoyed to have his “guard dog” back in one piece. He thinks Russell, who’s named after TV comic Russell Howard, might have been chasing after a fox.

“We were so worried about him”, a relieved John admitted. “He must’ve been after a fox when he fell in the water – he hates foxes with a passion. It’s incredible that he went through the barrier like some sort of ship. He usually won’t set foot out of the yard, even when the gate’s opened.”

He added: “Russell seems ok now, he got over the experience pretty quickly. I’d like to buy a pint for the guys who rescued him, they did a brilliant job.”