Our website uses cookies so that we can provide a better service. Continue to use the site as normal if you're happy with this, or find out how to manage cookies.
X
You are here
> Environment
> Fish in the Tidal Thames

Fish in the Tidal Thames

Several fish species found in the River Thames are protected under the Wildlife and Countryside Act 1981 or have been listed as a UK BAP priority species recognised as being threatened and requiring conservation action. 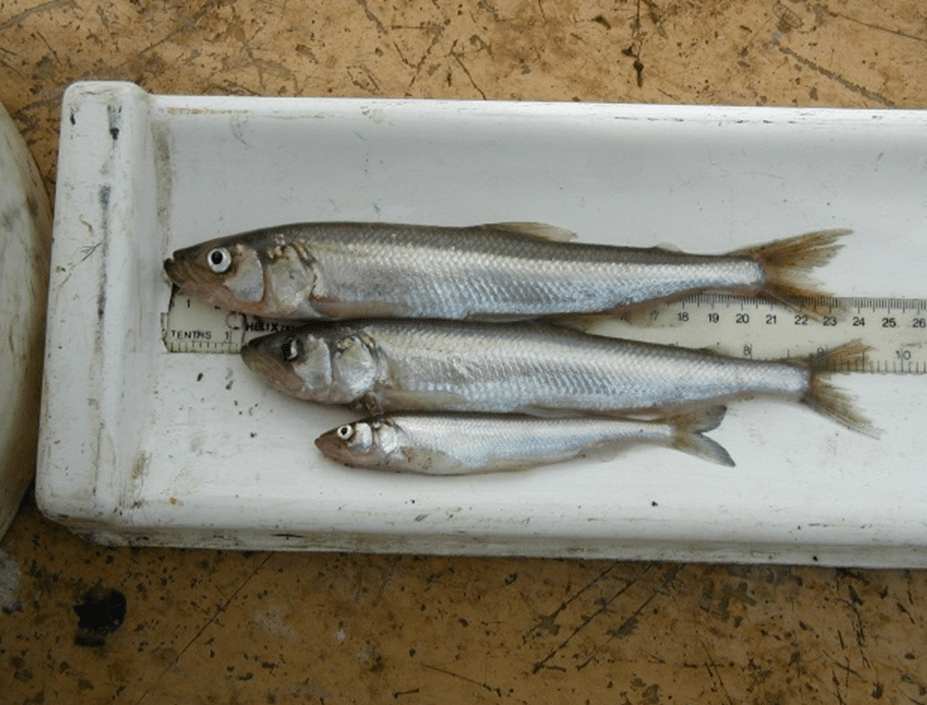 The European smelt (Osmerus eperlanus) (photo at right) is a migratory species that reach up to 45 cm in length and can be identified by their olive-green backs, white belly and silver stripes along their sides. A further way to identify the species once out of the water is by their cucumber like smell. The European smelt  is a UK BAP priority species.

Like many species, the European smelt was lost from the river in the 1950’s when the River Thames was declared ‘biologically dead’ due to the levels of pollutants. As the water quality of the river has improved, the European smelt has now returned to the river and a potential spawning site for the species has been identified in the upper Thames.

The European eel (Anguilla anguilla) was once common throughout the River Thames but numbers have been declining since the 1980s and is now classified as being critically ndangered. Spending most of their life cycle in freshwater rivers, streams and estuaries before migrating to oceans to spawn and lay eggs. The larvae of European eels remain in the open ocean for up to three years before entering the freshwater systems where they undertake a transformation from being translucent in colour (glass eels) to more pigmented elvers. The transformation continues in the freshwater environment as the elvers become yellow before becoming sexually mature eels approximately 20 years into an individual’s life cycle. At this stage the eels can be identified by their silver colour, large eyes and elongated snake-like bodies.

The migration of the European eel can be disrupted by the presence of physical barriers such as tidal flood barriers and for this reason it is vital for any new structures placed into water environments to consider whether species such as eel are able to migrate over or through the structure.

The Dover sole (Solea solea), otherwise known as the common sole, is a flat fish that is grey, grey-brown or red-brown in colour depending on the colour of the substrate of the environment. As a bottom dwelling or benthic animal, this species has eyes placed on the top of their body to allow them to detect threats from above and can grow up to 70 cm in length. Dover sole are known to spawn in the River Thames downstream of Gravesend and Tilbury.

The allis shad (Alosa alosa) and the twaite shad (Alosa fallax) are migratory species which spend most of their mature life cycle in the open ocean, only coming into freshwater to spawn during spring. Both species are similar in appearance with a single dorsal fin, deeply forked tail, grey-blue coloration on the back and spots running along the side of the body. The easiest way to distinguish between the two species is their size, the allis shad is considerably larger than the twaite shad.

The numbers of both species of shad have declined over recent decades, possibly due to overfishing and bycatch, but also due to the presence of obstructions within their migratory routes such as dams, sluices and weirs.