Our website uses cookies so that we can provide a better service. Continue to use the site as normal if you're happy with this, or find out how to manage cookies.
X
You are here
> Environment
> Terrestrial Mammals

The banks and foreshore along the Thames are home to many animals, including water voles, European otters and species of bats. 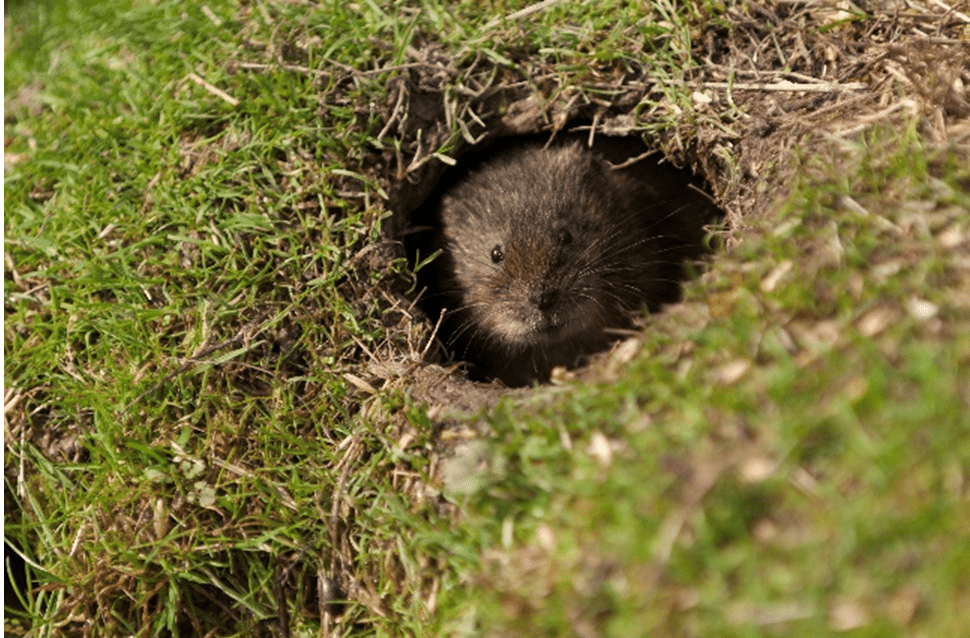 The water vole (Arvicola amphibius) is a semi-aquatic rodent (photo at right) that can be found in many habitats including rivers, streams and ditches, ponds, lakes, marshes and reedbeds. It can be identified by its brown fur, small ears and nose, and furry tail. The species is protected under the Wildlife and Countryside Act 1981. Water voles burrow into the banks of water bodies, the burrows are often fronted by areas of shorter grass, where water voles have been feeding. In addition to the burrows, latrines of vole droppings and piles of partially eaten grass and stems are found by the water’s edge.

Water voles rely on shallow, vegetated banks where they can burrow into the sediment and for this reason are likely to become disturbed by ground works required in development and land drainage. Ground works may require management or mitigation measures such as timing restrictions or using trained and licenced ecologist to displace water voles from an area in February or March to allow works to take place. This will require a licence from Natural England, and these will only be issued for conservation purposes.

In addition to disturbance and loss of habitat, water voles are at risk from predation by the American Mink (Neovison vison) which is an invasive non-native species (INNS).

The European otter (Lutra lutra) is a semi-aquatic mammal that can be identified by their grey-brown fur, broad snouts and pale chests and throats. This species is protected under both the Wildlife and Countryside Act 1981 and the European Habitats Directive and is one of the UK’s apex predators, feeding mainly on fish, waterbirds, amphibians and crustaceans.

Once abundant throughout the UK, the increase in pollution and habitat loss through the draining of wetlands resulted in a decline in numbers. Recent improvements in water quality and an increase in the habitat, populations are now increasing. Field signs of otter include tracks (or footprints) pressed deeply into the mud or sand alongside waterbodies and the presence of droppings containing fish bones, crustacean shells, feathers or fur.

In England, the species are known to breed throughout the year with litters of two to three pups being born at a time. These pups are raised entirely by the female and are unlikely to leave the holt, often made in a tree system, within a hole in the bank of a waterbody or under a pile of rocks, for around ten weeks.

Otters have been recorded in central London, and are thought to have travelled down the River Lea.

All bat species and their roosts are legally protected under both the Wildlife and Countryside Act 1981 and the Conservation of Habitats and Species Regulations 2017. There are 18 species of bat found within the UK and all of these species feed on insects, along the River Thames the three most frequently sited species are the Common Pipstrelle (Pipstrellus pipistrellus), the Soprano Pipstrelle (Pipistrellus pygmaeus) and the Daubenton (Myotis daubentoniid).

The pipistrelle species roost and hibernate in crevices in buildings, this can be between roofing tiles and felt, soffit boards or eaves boarding, or between cavity walls. They also roost inside the holes in trees as well as bat boxes. Trees, woodland, and hedgerows are important feeding habitats, they often follow woodland edges and hedgerows, but will hunt along rivers and other water sources.

The Daubenton's bat forages for small flies, such as midges, caddisflies and mayflies, just above water; it can even use its feet and tail to scoop up insects from the water's surface as it forages. Daubenton's bats roost near water, under bridges or in tunnels, and in holes in trees.

Bats will regularly move roost sites, along commuting habitats, which can be the edges of woodlands, along hedges and rivers or tree-lined footpaths. These commuting habitats provide landmarks to assist with navigation and provide some protection from predators.

Any activity that may affect bats or their roosts may need a licence from Natural England. To determine the potential presence of bats, surveys of buildings and trees must be carried out. If there is the potential for bats to be present, further activity surveys are required. Both survey types should be undertaken by an experienced and licenced ecologist using best practice guidance.

There are several threats to bats in the UK including habitat loss, building and development, predation from domestic animals, lights and roads interrupting migration routes and the placement of wind farms or turbines.