Our website uses cookies so that we can provide a better service. Continue to use the site as normal if you're happy with this, or find out how to manage cookies.
X
You are here
> Environment
> Tidal Energy

It is apparent that the Thames could provide local tidal energy opportunities, though it is unlikely to be via traditional larger turbine technology. This is because the estuary creates different challenges and oppurtunities for innovation.

The PLA is seeking to encourage the use of microgeneration in suitable for the tidal Thames in using existing infrastructure while minimising environment impacts for migratory species and protected habitats.

Past attempts to deploy untested new technology would have required significant investment for the applicant and regulators to ensure the safe use in the tidal Thames. Potential projects often became caught in a no-win discussion about measurement and demonstration of impact before the equipment could be evaluated, and the power benefit could be defined. The PLA has been aware that these issues prevent successful deployment or tests of potentially important technology on the Thames in the journey to a more resilient and energy efficient operation.

Using our extensive knowledge of the river, the world leading hydrographic team have modelled the rivers power for all areas except the authorised channel for microgeneration to identify locations for deployment. The model was initially run for 2meters per second but limited sites where found with this speed for significant periods of time. The second run used 1meter per second, this found a number of sites where this occurred for more than one hour in each direction. This model and the methodology used is available to view here.

As the generation is needed in the centre of the estuary the use of the river by others and wildlife is a key consideration for the PLA. The technology must not affect other structures for example by depositing sediment. The impact of noise and pressure must also be minimised for the technology due to the close proximity of residents and the effect on migrating fish and mammals. Without testing the equipment in the river or providing evidence of extensive use elsewhere in comparible conditions it is difficult for the PLA and other regulators to permit direct implementation at this point in time.

The power of microgeneration, if successfully implemented across the estuary, will significantly contribute to the goal of transforming the Port of London to a low emission economy and environment. However, the use of any technology must not conflict to current use of the river, wildlife and residents on the estuary, so the PLA has designated a site for trials of the microgeneration technology, that is a lower risk than where commercial deployment might eventually be possible The site is not necessarily a high potential site for generation, but permits the PLA , the developer and other regulators to gather an understanding of the technology in the Thames and its further deployment.

Successful trials with provision of all the relevant required reporting will then be considered for river works licences and can approach staff leading the PLA’s Investment Plan if relevant.

In 2021 we designated a site in the river to facilitate scale and full-size trials of the types of schemes that could be used in an environment, used and built up as it is of the tidal Thames. Applicants are expected to trial both their scale and full size systems on site, or at least the full-size systems before they can be deployed elsewhere in the Thames to facilitate risk management and full scale testing, if there isn’t available data to meet the requirements of the PLA and other regulators.

Applicants are expected to trial both their scale and full size systems on site, or at least the full-size systems before they can be deployed elsewhere in the Thames to facilitate risk management and full scale testing, if there isn’t available data to meet the requirements of the PLA and other regulators.

The site is based in Thamesmead, on the south side of the river in the Royal Borough of Greenwich. The reach is Gallion's Reach, and the mooring is just inside the Thames Barrier Control Zone.

Passing vessels will include large ships for the, cruise, sugar and aggregate berths upriver, inland and recreational vessels. The site is a collar barge mooring not routinely used at present, outside of the authorised channel (but within navigable water). This is similar to most moorings available on the river and alongside piers/pontoons where the PLA believes could benefit from micro tidal generation. The site is in the area 3 chart of the PLA's Heat Map.

The full details of the site environmental factors, flow rates and requirements for use are provided in the handbook here. Guidance documents and reference material is provided below.

Initial enquiries are to the Environment team via [email protected]

In 2016 to support the Thames Vision the PLA has undertaken a detailed model of where flows reach 1m/s for more than an hour in a tidal cycle. Modelling excluded the navigational channel to avoid any interaction with most river users. The results indicated that there are limited areas where the flow is sustained from long periods.

The overview of the areas studied is below. Please click on the relevant area of interest to view the findings in more details.

If developers, site owners or engineers wish to develop and test tidal energy on the Thames they are welcome to review the data in the model, on the test site and with the PLA. All enquiries via [email protected].

The full methodology in developing the assessment and conclusions can be found here. 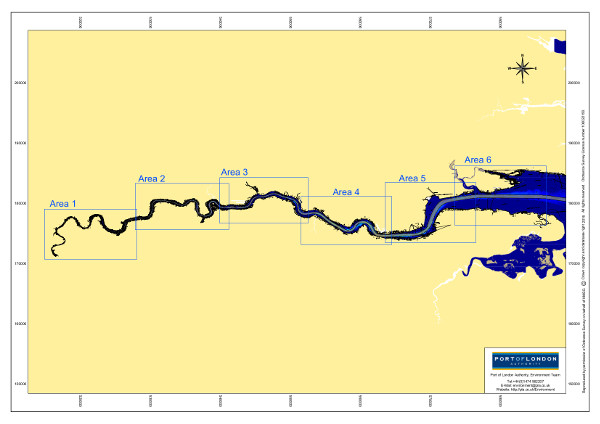