Our website uses cookies so that we can provide a better service. Continue to use the site as normal if you're happy with this, or find out how to manage cookies.
X
You are here
> Events
> New Year’s Eve – and the tidal Thames 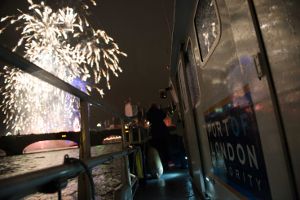 The Mayor of London’s New Year’s Eve Fireworks and Lighting Display will be held in King’s Reach from 23:59 on 31 December 2015. This will take place from three moored barges on the south side of the river both upriver, and downriver of Waterloo Millennium Pier and will last for approximately eleven minutes.

The tidal Thames is particularly busy on New Year’s Eve, with almost all London-based passenger vessel operating – most with large parties aboard. Passenger vessel traffic and movements about piers will be frequent.

To protect the safety of all river users there is – as in previous years – an exclusion area in place during the fireworks display.

As previously advised to all river users in Notice to Mariners M77 of 2015, the river will be closed to navigation between 100 metres upriver of Westminster Bridge and 100 metres downriver of Charing Cross Bridge between 2340 on 31 December 2015 until 0020 on 1 January 2016. No vessels must encroach into this exclusion zone. This will be enforced by two Port of London Authority (PLA) launches displaying flashing blue lights, one positioned upriver of Westminster Bridge and one positioned downriver of Charing Cross Railway Bridge.

The tidal Thames makes for a beautiful backdrop for these fireworks – but it is important to underline that this is a busy and fast flowing river with many potential hazards that must be treated with respect at all times. There is a tidal range of over 7 metres and can flow at over 4 knots in the channel and 6 knots around the bridges. There is also wash from passing motor vessels to contend with and wave heights of a metre are easily possible.

The river closure set out in Notice to Mariners No.77 means, in a nutshell, that it is not possible for small recreational craft to get a close-up view of the fireworks.

The PLA advises any navigators of small private recreational vessels to plan their passage very cautiously and carefully - if they decide to venture out - by:

This annual fireworks display can be watched from the comfort of your own home, as the fireworks will be shown live on BBC One. Further event details from the Greater London Authority website.

Further general recreational safety advice and guidance about the Thames can be found at: www.boatingonthethames.co.uk.