Our website uses cookies so that we can provide a better service. Continue to use the site as normal if you're happy with this, or find out how to manage cookies.
X
You are here
> Events
> Port of London Authority Centenary Concert

The Port of London Authority's Centenary Concert 'Celebrating London and the Sea' raised over £12,000 to help fund the RNLI's essential life saving operations on the Thames.

Celebrities from the world of classical music and members of the Royal Family backed the fundraising event at Cadogan Hall in Chelsea on 18th April 2009.

The money, collected from sponsorship, the sale of tickets, programmes, and on-the-night donations, has been given to the Royal National Lifeboat Institution.

"The PLA has been crucial to the smooth running of the Port for 100 years, but we didn't just want to celebrate the authority's centenary, we also wanted to mark the major contribution that the Thames and the sea make to the culture and economy of London and the South East.

"From the start, we were keen that the event should raise money for a nautical charity, and the RNLI's rescue work was an obvious choice." 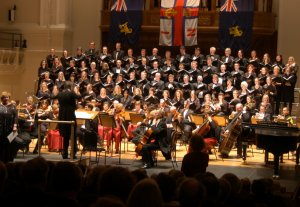 The evening was hosted by soprano and Radio 3 presenter Catherine Bott.  The London Mozart Players and the City of London Choir were conducted by Hilary Davan Wetton.

Joining Catherine, in songs of London and the sea, were soloists Frances Bourne, Adrian Ward and Julien Debreuil.  The trumpets of the Royal British Legion provided the fanfare opening and joined the audience and all performers in a rousing finale rendition of 'Rule Britannia'.

HRH the Duke of Kent and HRH Princess Alexandra were the PLA's guests of honour, having been welcomed by Cllr Hon. Joanna Gardner, Mayor of Kensington and Chelsea, who also welcomed Alderman Ian Luder, Lord Mayor of the City of London and Admiral of the Port.

Among the 600 strong audience were many members of staff and pensioners of the PLA, and friends of the RNLI.

"The RNLI is proud to be the benefitting charity of the PLA's Centenary Concert.  We are so grateful to everyone who put the event together and to those who attended. The money raised will go towards training and equipping our volunteer crew members at our four lifeboat stations on the River Thames here in London."

The PLA is grateful to the following organisations for their help and support in making the event possible: