Our website uses cookies so that we can provide a better service. Continue to use the site as normal if you're happy with this, or find out how to manage cookies.
X
You are here
> Events
> Thames and London Waterways Forum 2021

More than 100 people came together on 22 November for this year’s annual Thames & London Waterways Forum.

Jointly hosted by us and the Greater London Authority this year’s event was hosted both in person at the Museum of London Docklands, and online.

London’s deputy mayor for Transport, Heidi Alexander, delivered the opening address. She reflected that the last 18 months had been the most difficult period in London’s history since the Second World War.

She said: “Getting London’s economy back on its feet has been a top priority for the Mayor. The Let’s Do London campaign – London’s largest ever domestic tourism campaign – has brought £70 million in added tourism spend and 280,000 extra visitors to central London.” The deputy mayor highlighted Transport for London’s support to the river industry, providing relief on tenant fees in 2020 and 2021.

She concluded by thanking the river community for their hard work, resilience and commitment to promoting the Thames and London’s waterways in what have been extremely difficult circumstances. Presentations and discussions at the event covered London’s recovery, light freight developments, the refresh of the Thames Vision and the development of a low-carbon and resilient river.

Event moderator, Martha Grekos, who is a non-executive member of the Thames Estuary Growth Board and the Mayor of London's Infrastructure Advisory Panel, concluded: “There are clearly a lot of exciting low-carbon and green developments and innovations coming forward, which will see the river used more by people, freight and nature, become even more resilient given the climate crisis we are facing and provide for cleaner operations to advance too. The river has a celebrated past and an exciting future. It was very clear that there was lots of love for the river in the room, and online! Its legacy is now in our hands.” 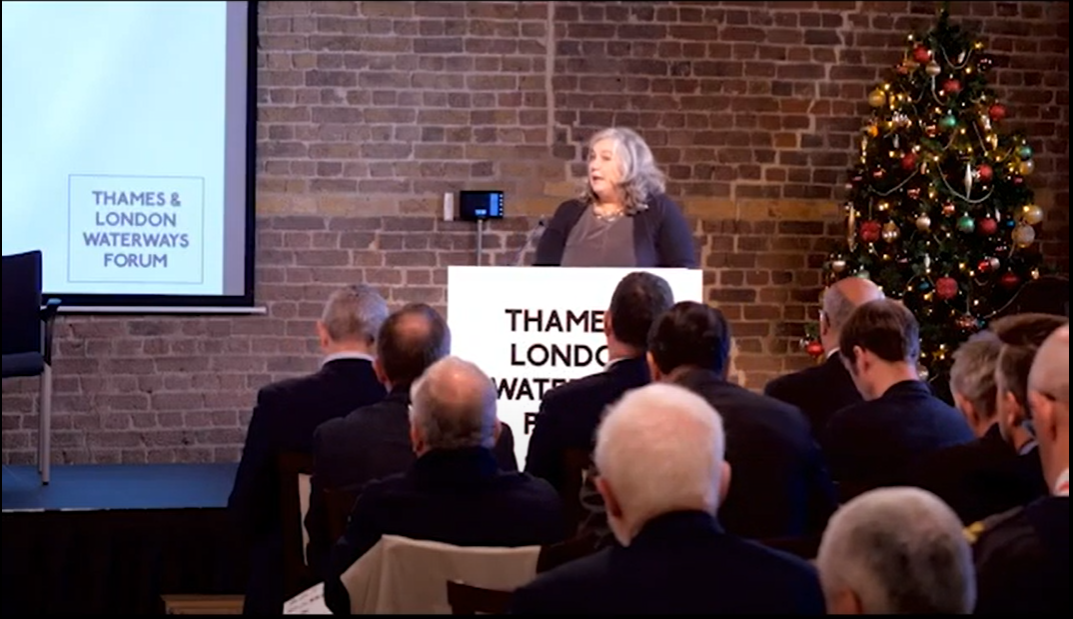 3.15 pm Towards a low carbon and resilient river

Heidi Alexander was appointed as Sadiq Khan’s Deputy Mayor for Transport in June 2018. Before joining the Mayor’s team Heidi was the Member of Parliament for Lewisham East from 2010-2018. She served in the Whips’ Office before being appointed as Shadow Secretary of State for Health. Between 2006 and 2010 Heidi worked as Deputy Mayor of the London Borough of Lewisham and Cabinet Member for Regeneration.

Sam Boyd Williams is a Technical Director within the Advisory and Economics team at WSP. Sam leads the team’s work in logistics and Freeports. He recently led WSP’s work in developing a model for light freight on the Thames.

Abby Crisostomo is the Project Director for Thames Estuary 2100, the 100-year Plan to collaboratively manage tidal flood risk in the Thames Estuary, adapt to a changing climate and plan for the future of our riverside. She also chairs CIWEM’s SuDS and Water Reuse Policy Leadership Group. Previous roles include: head of climate adaptation and sustainable development for the Greater London Authority; leading sustainable design and construction projects for KLH Sustainability, including London Olympic Park legacy projects; and environment and social policy and planning in the US at the Alliance for the Great Lakes and Chicago’s Metropolitan Planning Council.

Tanya Ferry is the Head of Environment in the Planning and Environment Department at the Port of London Authority and advises on the coordination and implementation of the PLA’s environmental work, statutory protection and improvements throughout the tidal River Thames. She has worked at the Port of London for eight years and has worked on the Thames for over seventeen in previous Environment Agency roles. Tanya is working to promote sustainable port operation, to improve stakeholders understanding of the contributions to the environment by the port industry and environmental considerations of the Thames estuary. Tanya works within environmental management with a particular focus on the water environment. Her roles have involved interpreting a wide range of regulatory compliance for a wide range of activities and sources, working with charities and local groups to improve the river and increase working partnerships with commerce.

Alistair Gale joined the PLA as Director of Corporate Affairs in August 2006. He leads on stakeholder engagement, internal comms, strategy and Thames Vision development. Prior to joining the PLA, Alistair set up and ran the in-house communications function for the UK’s largest cement maker, Blue Circle, remaining through the takeover by the Lafarge group and subsequent integration. Alistair has a degree in Geography from the University of Southampton.

Philip Graham was appointed as Executive Director, Good Growth and joined the GLA in January 2020. Phil joined the GLA from the National Infrastructure Commission where he was Chief Executive. Prior to that he was Head of the Independent Airports Commission after holding two Deputy Director roles in the Department for Transport (DfT) – responsible in one for the government’s high-speed rail strategy and in the other for transport security (including work on the Olympics) and research. Phil had several team leader roles in the Civil Service before that. Before he joined the Civil Service, Phil set up and ran an independent theatre company.

Martha Grekos is a barrister specialised in Planning Law and Policy. She is currently a Board Member of the Thames Estuary Growth Board, a Panel Member of the Mayor of London’s Infrastructure Advisory Board and also a strategic advisor to the Civil Aviation Authority advising on process, policy and key decisions surrounding the expansion of Heathrow Airport.

Helen Murphy is Head of Sustainability at Cory. Prior to Cory, she spent ten years working in the energy industry. Helen has a master’s degree in International Relations from the London School of Economics and Political Science.

Feeroza Patel is Director of Communications at London & Partners, the business growth and destination agency for London. Feeroza leads the organisation’s communications function including PR and brand and oversees the promotion of London to international business and consumer audiences. Feeroza is a trustee of The House Mill Trust, which maintains and protects the Grade I listed House Mill on the River Lea in east London.

Danny Price is General Manager of Sponsored Services, DLR and Woolwich Ferry at Transport for London (TfL). Danny joined TfL in 2011 and is currently General Manager for Sponsored Services, accountable for the management and development of London River Services, Santander Cycles and the Emirates Air Line cable car. Earlier in his career, Danny was part of a small management team that set up the London Eye (Millennium Wheel), where he became accountable for all aspects of its operation and commercial development.

Randal Smith is an Executive Director with the Thames Estuary Growth Board leading on its river freight workstream and digital infrastructure. The TEGB, led by its envoy Kate Willard, develops and promotes investment propositions to ensure the region regenerates effectively and achieves its potential. It is a private sector led Board with public sector involvement. TEGB works in partners with a range of actors including the PLA. Randal has 25 years’ experience in policy and public sector strategy.

Simon Thurley is an Associate working within the Advisory and Economics team at WSP. He has a strong interest in strategic urban planning and how sustainable infrastructure investment can have a positive impact on the shaping and growth of future economies and cities as they transition to Net Zero.

James Trimmer was appointed the Director of Planning and Environment in September 2013. He is a Chartered Surveyor and a Chartered Town Planner. James joined the PLA in 1999, initially as the Planning Officer. Before this, he spent ten years working within both the public and private sectors, ultimately advising a number of ports and terminal operators throughout the UK on strategic planning matters. He is corporately responsible for land and marine planning issues, statutory consenting and compliance and environmental issues including the PLA’s commitments on Net Zero. He has a particular interest in inland freight and is the PLA’s Project Director for the Thames Tideway Tunnel scheme.