Our website uses cookies so that we can provide a better service. Continue to use the site as normal if you're happy with this, or find out how to manage cookies.
X
You are here
> Media
> News Releases
> Furnival first for rowing safety on the tidal Thames

Furnival first for rowing safety on the tidal Thames 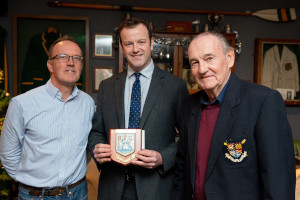 Hammersmith's Furnival Sculling Club has been named 2019's safest rowing club on the tidal Thames in an annual awards scheme supported by the Port of London Authority (PLA).

Based in Lower Mall, the club has topped the annual league table established by the Thames Regional Rowing Council (TRRC) to encourage the rowing community to always put safety first. It's based on assessments of safety reports submitted to British Rowing by clubs up and down the Tideway.

Henry Blythe, the club president, collected the £1,000 prize from PLA assistant harbour master Joshua Rylah at a ceremony held at the club on Monday (9 December). The money will help refurbish the club's store of safety equipment.

Henry Blythe said: "We are absolutely delighted to win this award. It's a reflection of all the hard work our wonderful safety officer Mike De Paoli puts in and, of course, all the club members, who are so diligent and thoughtful when on the river.

"Thank you to the TRRC and the PLA for sponsoring this award, which does so much to encourage good behaviour on the Thames." 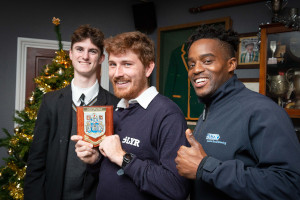 Joshua Rylah said: "Furnival's approach to keeping their members and other river users safe out on the water has been second to none this year.

"Attracting a wide and varied membership, it has excelled in ensuring that everyone involved takes seriously the responsibility of looking after themselves and others using the river.

The TTRC's Luke Dillon: said: "To allow everyone to share the river, it is vital that clubs and their members abide by the Rowing Code. These awards recognise the importance of having a good culture around safety and navigation and evidence of the importance placed on it.

"It's great to see this year's winners putting safety at the heart of everything they do, enabling their members to enjoy the river safely and supporting clubs work to broaden participation in the sport."

The runners up – Sons of the Thames Rowing Club, also based in Hammersmith – had their record recognised with a cheque for £500. 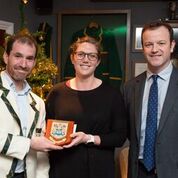 London Youth Rowing also received as special award of £500 for its work promoting safety on the river in its work with schools and youth groups across the capital.

The PLA Rowing Safety Awards were established in 2006.