Our website uses cookies so that we can provide a better service. Continue to use the site as normal if you're happy with this, or find out how to manage cookies.
X
You are here
>Behind the scenes at the museum

Behind the scenes at the museum 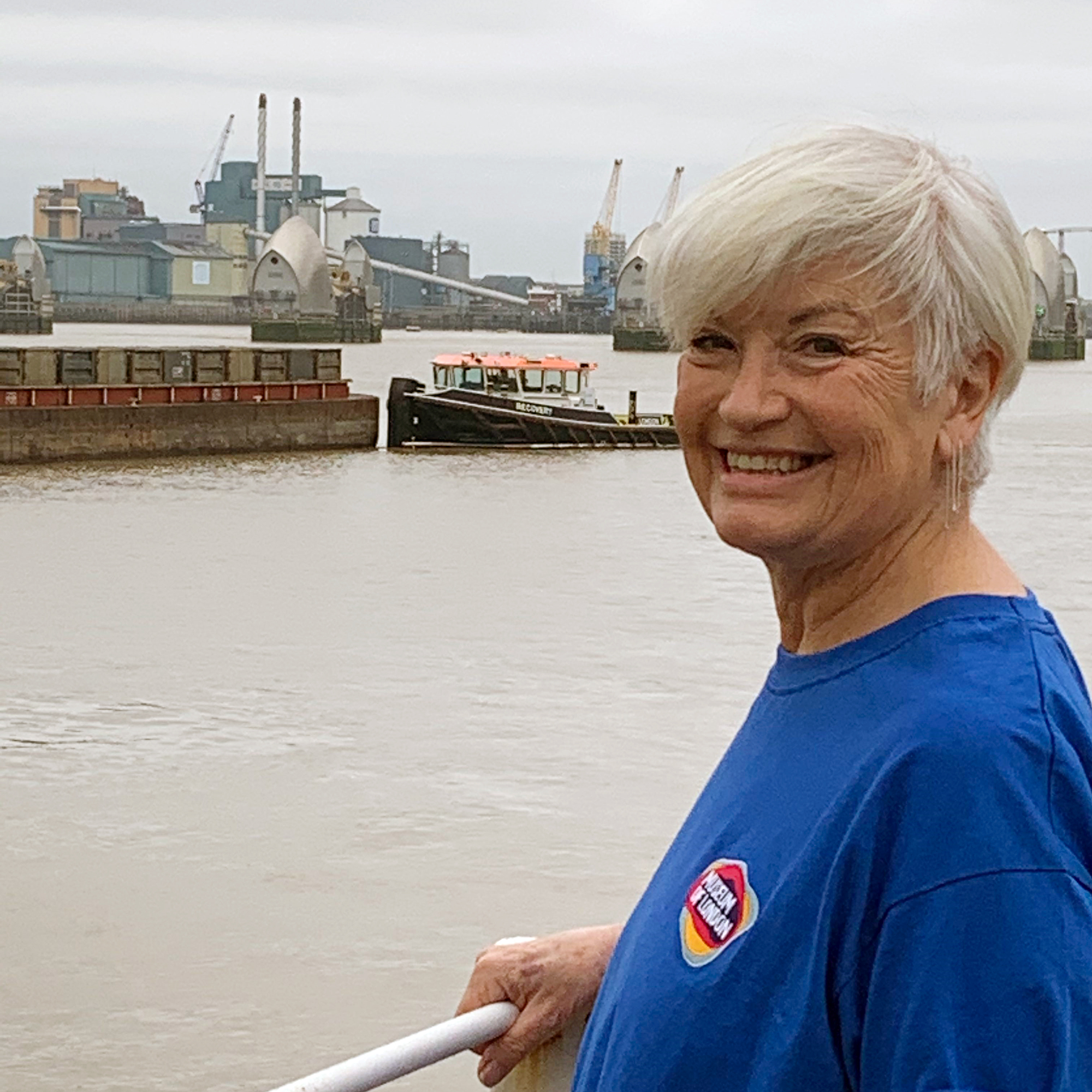 From pleasure boat barmaid to volunteer guide at the PLA’s new London: Port City exhibition at the Museum of London Docklands, Kate Cameron’s seven decades have revolved around the tidal Thames.

“I have lived near the river for most of my life. It becomes part of you.

“If you work on the river, your life is the river. It completely defines you.

“The River Thames is London.

“It’s the reason why the city has become the magnificent place it is today.

“In the heyday of the old docks, the river not only meant jobs on boats, it also sustained pubs, cafes, newsagents, you name it.

“As London: Port City shows, trade on the river has permeated into the language of the capital too – for example, influencing the names of places, streets and, of course, pubs.

“I just love that sense of belonging that history provides.”

“It’s been an honour to be one of the Londoners who have helped and advised the exhibition curators.

“Rifling through the museum’s audio archives triggered so many memories for all of us who volunteered to be part of the Listening to London project.

“Even via Zoom, we could not stop talking.

“Truth be told, even though the formal sessions are over, the conversations continue on a regular basis.

“With the lockdowns finally consigned to history, it’s great to be able to do so in person now.”

“It gets me thinking, in a hundred years’ time, what will future generations think of the pandemic?

“It’s a good reminder for everyone to share your recollections – written or verbal.

“You are never too young to start living history.”

“Over the years, I have met so many characters.

“It’s hard to know where to begin. The Prentices, the Dwans, the Bulmans…. the list goes on.

“It’s why I am so looking forward to being a guide at London:Port City.

“It will be the perfect opportunity to remember all the people I have met and retell their stories.

“One of my own earliest memories is my mother describing how the Thames glowed orange during the Blitz, reflecting the inferno of flames from buildings bombed along its bank.

“I remember her words to this day. They painted such a vivid picture in my mind.”

“There are so many great river moments that stand out in my memory.

“I vividly recall back in 1977, the year of the Queen’s Silver Jubilee, I was pregnant with my daughter, Jane. Loads of boats were moored in Westminster.

I was determined to speak to a mate, who was on another boat. I crawled through the stern windows of the boats. It was the easiest way to get to her, as river traffic had been halted.

“Over three decades later, no-one who was lucky enough to take part will forget the Queen’s Diamond Jubilee Pageant in 2012, despite the torrential rain that day.

“Being on the river on New Year’s Eve is always special too.

“On a boat near Parliament, the bongs of Big Ben at midnight reverberate through your whole body.

“It will be so good to celebrate the arrival of 2022 out on the river again.

“There have been political moments too.

“I was on the picket line when the original docks closed.

“Nor will I forget, years later, Colin’s satisfaction, as a freeman of the river, being able to instruct Margaret Thatcher’s vessel to move, as it was obscuring my view of a meridian line laser display over the river.”

“My own river story began at the original Westminster Hospital, where I was born.

“My education took me as far afield as a convent school in Crystal Palace, but I grew up nearby, close to Chelsea Bridge, in Pimlico, and clearly remember the waste disposal tugs at Grosvenor Dock, now home to apartment blocks.

“My maternal grandfather was closely involved in bridge repairs locally.

“The world was a smaller place back then.

“I remember setting off to Greenwich for the day with a friend once. I had no idea you could get there and back in a day – so packed a suitcase.”

“After a spell working in Scotland, I got a job serving at the Wandsworth Bridge Tavern, where I soon met my former husband, Colin, who was a freeman working on the river, following in the footsteps of his father, Cornelius, known to all as simply “Connie”.

“Dating the local barmaid was a competitive ritual for river workers in those days. I suspect it still is…

“It only took Colin some twenty years to claim the winnings of his bet with his friend that he would succeed in asking me out first.

“I remember Colin out on the river, using sign language to relay the news of our engagement to his mates aboard other vessels. Life on tugs was  hot, smelly and noisy.

“Both my children were born a stone’s throw from the river at Guy’s Hospital.

“Everyone knows one another in the river community.

“I started work behind the bar on tourist and party boats in 1995, when Colin and I separated.

“Often, we would engineer for wedding parties to reach the pool of London, just as Tower Bridge was raised.

“Every bride was convinced it had been arranged just for them.

“One of my favorite tales of river life emerged hearing a 1989 museum recording of a conversation with Charles Lunn, a Rotherhithe café owner.

“It’s a story, passed down from generation to generation, about an open coffin, which was washed out of an open window in Gulliver Street during the floods of 1921 – to be retrieved by boatman, Dido Plum, who had been delivering supplies by boat to stranded locals.

“It sums how up how river folk look after each other, through thick and thin.”

“It’s no exaggeration to say you used to be able to tell where you were on the river, just through your nose, especially on foggy days.

“I personally remember smelling the bricks in the wharves, especially the aroma of spices.

“Call them odorous or fragrant, smells are a key feature of London: Port City – not to be missed!”

“London and its river are so special to me. I have always loved museums too.

“As my family will happily confirm, I also love talking.

“So being on hand to chat to visitors at London: Port City, well it’s the perfect gig. What’s not to like?

“I am very much looking forward to meeting visitors from far and wide.

“It will be great to hear their memories of the port and how things have changed over the years.”

“I think children in particular will love London: Port City.

“It’s the perfect destination for a half-term day out.

“The design team have done a tremendous job in making it accessible to people of all ages.

“There is truly something for everyone. And its free!

“Forget the museums of days gone by, all dusty cabinets and endless text.

“This exhibition is a truly interactive experience, bringing the story of London’s port to life.

“I think the adults will have a great time ‘helping' the children.

“Look out for the whale poo too….”

Past, present and future

“My river journey started as a resident of the north shore of the Thames, when the communities either side of the river were very different; even the language we used was different – “car” in the north for example, “motor” in the south.

“Over the years, the differences have become much less pronounced.

“These days, I am firmly at home on the southern shore, living just a stone’s throw from the Woolwich ferry terminal.

“I love watching the boats cross the river to and fro. It’s hypnotic.

“And, given my passion for history, it’s great to be on the doorstep of Maritime Greenwich.

“I am also lucky to have my children and grandchildren living nearby.

“My daughter Jane, who was the first female to become a freeman of the river in 1993, before joining the PLA, now works on river-related matters for the union UNITE.

“James, my son, is in charge of lighterage for Cory, based just up the road in Charlton, continuing the work his father did for the company back in the 1970’s.

“Jane was apprenticed in 1993, James the following year.

“It’s too early to say whether my grandchildren will follow them into maritime careers.

“But I would not be surprised if they did.

“The river seems to be in our blood.”

Quick fire
West End or East End? That’s not difficult. East End.
Favourite spot on the Thames? At the back of a boat on the river. Watching the sun come up over London is magical.
Summarise the river in three words: I can do no better than “boozers, bompers and bridgers”, the title of a book by Con Maloney of the Friends of Island History Group.
Sources of relaxation? I am a great lover of Kpop bands, as such SHINee, BTS and Third Line Butterfly.