Our website uses cookies so that we can provide a better service. Continue to use the site as normal if you're happy with this, or find out how to manage cookies.
X
You are here
>Inspired by a childhood love for the Thames

Inspired by a childhood love for the Thames 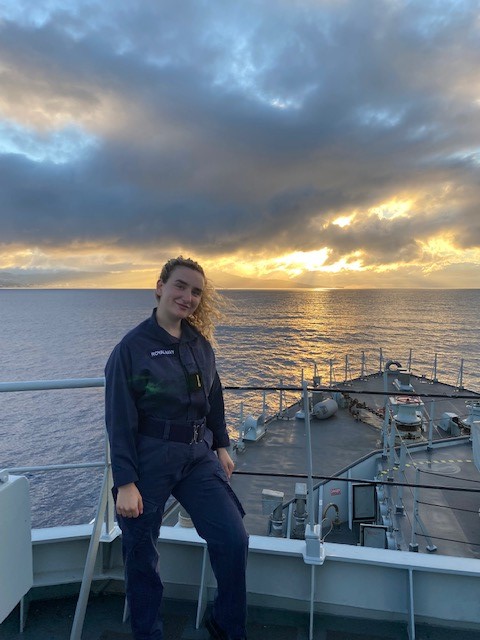 Ahead of National Apprenticeship Week (7-13 February), Gillingham’s Scarlett Barnett-Smith charts how a PLA apprenticeship launched her career afloat, inspired by a childhood love for the Thames.

From the river to the high seas

“I’ve always felt so lucky to be able to train and work on one of the most famous - and in my opinion, beautiful - rivers in the world.

“I feel totally at home on the water, aboard great vessels, meeting great people.

“My introduction to the Thames was via the Royal Yachting Association.

“As a child, I was very privileged to do a lot of sailing in the Mediterranean. It is where my maritime passion began.

“I love sailing. Just the feeling of being afloat and underway has always made me feel so happy."

“When I left school, I decided I wanted to look for a job on the river.

“I was always told to do what you love. My parents, sister and cousins are all hairdressers, and they all love what they do. They followed their dreams and I have followed mine too. Just mine has been down a very different path.

“It’s been roughly three years now since I started at the PLA.

“When I left school, I decided I wanted to look for a job on the river.

“It’s roughly three years now since I started at the PLA.

“I put a lot of pressure on myself, but all the hard work paid off in the end.

“It led to the PLA and Trinity House sponsoring my current cadetship at Warsash Maritime School, part of Solent University in Southampton.

“In my first year on the course, I have already seen and learnt so much.”

“I’ve had the benefit of some amazing teachers.

“It was the late Alex Hickman, former training manager at the Company of Watermen & Lightermen, who first talked me through the career options available on the river. He is much missed.

“I also owe a huge debt to Rachel De Bont, my training officer at the PLA and my role model.

“The dedication Rachel shows in helping her flock meet their goals is unbelievable. We keep in close touch.”

A woman on the water

“Throughout my apprenticeship, I attended a lot of events to promote maritime careers to other women, through the Thames Skills Academy and the Women on the Water network.

“I think it’s so important to have a more diverse maritime workforce.

“At times, I’ve found it challenging, being in such a male-dominated industry.

“Fortunately, things are changing for the better and more women are actively applying for apprenticeships afloat.”

“My cadetship consists of five phases, over three years. I do two phases at sea and three at college.

“I am required to have spent 12 months at sea before sitting my oral examination at the end of my course.

“Learning online due to the pandemic has been challenging at times, but Warsash have made it enjoyable and effective.

“It has been lovely being near the water, which has really helped me concentrate.

“I now have my Inland Waterways Diploma and received first-class training from SeaRegs, gaining a number of other qualifications.

“Of course, there’s still a lot I need to learn, but I feel grateful for my PLA apprenticeship.

“It gave me a massive helping hand.“

“It’s been one of my goals for a long time to crew a Trinity House ship, so I was over the moon last year when my cadetship took me aboard THV Galatea.

"With Trinity House vessels, I have sailed round much of the UK’s disctinctively unique coastline. I was particularly struck by the beauty of the east coast.

“Next, I became the first ever Merchant Navy deck cadet to deploy with a Royal Navy ship.

“We sailed from Portsmouth to Hawaii, on HMS Tamar. We crossed the Atlantic Ocean, the Caribbean Sea, then the Pacific Ocean, stopping in Curacao and San Diego on the way.

“After five months onboard, I then joined the THV Patricia, which was anchored in the Thames Estuary.

“Being back on the Thames on board a ship as a cadet, and not an apprentice, was a very special feeling.”

“I can’t explain how it feels to live, eat, work and do everything with the same people, for months on end, on a ship, miles from home.

“I really value the friendships I’ve made while being part of different crews.

“It can be really difficult to keep in touch with friends and family back home when at sea.

“I spent my 21st birthday in the mid Atlantic.

“Not being able to call home was hard, but I celebrated in a way, completely out of the ordinary.

“I always particularly look forward to getting back home and a cuddle from my dog Dolly, a poochon.

“No matter how long I am away, she always remembers me when I knock at the door.”

“My absolute dream would be to return to my roots on the River Thames and be a pilot, guiding larger visiting vessels in and out of port.

“I am going to do whatever I need to do to make it happen.

“Evan Simkus, a PLA pilot, was really helpful to me when I started my journey at sea.

“By chance, we passed on the Thames Estuary, when I was onboard THV Galatea and he was piloting a cargo ship. It was brilliant to see an old colleague, from ship to ship!”

“It was the best decision I ever made.

“There was not one day throughout my apprenticeship when I woke up and didn’t want to go to work.

“I loved every single minute of it."

Favourite part of the Thames?

Albert Bridge. For starters, it’s pink, my favourite colour. It lights up so beautifully at night.