Our website uses cookies so that we can provide a better service. Continue to use the site as normal if you're happy with this, or find out how to manage cookies.
X
You are here
> News Releases
> Royal Links with the Thames

Royal Links with the Thames 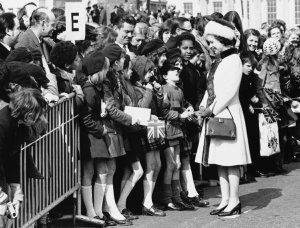 Queen Elizabeth II stops to greet young children on the New London Bridge over the River Thames in London on March 16, 1973 as she went on a royal "walk about" on the bridge after officially opening the structure. Heavy police security shadowed the Queen. (AP Photo by kind permission of the Press Association)

1. The river Thames is the most important of the United Kingdom’s four ‘Royal Rivers’.  For over 1000 years, monarchs and royalty have made their homes along the Thames and in London.

2. Since Tudor times, the Thames has provided a celebratory route for royal events and processions, including arrivals, departures, receptions, coronations, weddings and christenings.

3. King Henry VIII owned two royal barges – the Lyon and Greyhound – which served his riverside palaces, and were kept at the Royal Bargehouse, at Lambeth.

4. The reign of Queen Elizabeth II has been notable for river events.

6. The Queen’s Silver Jubilee was celebrated by a River Progress and Pageant, held on the 9th June 1977.  Over 140 vessels took part with the Queen embarked in the second of the PLA’s launches to be called Nore,

7. The Queen’s Golden Jubilee, in 2002, was also marked by a tribute event, timed to coincide with the regular Thames Festival.

8. Royal links with the Thames have included the Queen opening:

9. When officiating at waterborne events, the Queen is accompanied by her Royal Bargemaster and some of her 24 Royal Watermen, who are all skilled and experienced Thames watermen. Royal Watermen are one of the most ancient appointments in the Royal Household. 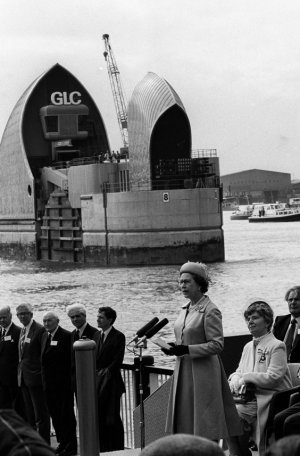 The Queen officially opening the £460 million Thames Barrier at Woolwich. (AP Photo by kind permission of the Press Association)

10. The Queen’s much wider involvement with the port and river has included visits to the buildings and docks of the PLA.  In 1959 the Queen and the Duke of Edinburgh paid a visit to mark the PLA’s 50th Anniversary, touring the busy Royal Docks onboard the PLA’s inspection vessel St. Katharine.

11. Symbolically, when the Royal Yacht, Britannia made her final visit to London, in November 1997, the Queen, the Duke of Edinburgh and the Prince of Wales held a special farewell lunch, moored opposite HMS Belfast.