Our website uses cookies so that we can provide a better service. Continue to use the site as normal if you're happy with this, or find out how to manage cookies.
X
You are here
> Media
> News Releases
> Pentalver Opens Permanent Container Services Facility 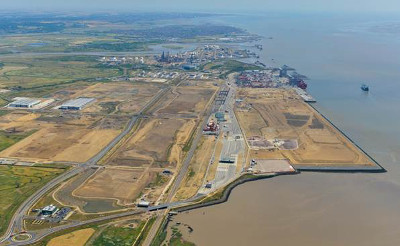 Plans for the site – which will be built in two phases - were announced in January and positions Pentalver as the largest container service operator at the port.

The new yard, located adjacent to the port’s main gate, can be expanded to nine acres over the coming years.

Pentalver has been providing empty storage, dry repair and reefer services at its temporary premises at DP World London Gateway since April 2014.

From its new site, Pentalver will offer a full range of services to vessels being handled at the terminal, including cargo handling, transport, loaded storage, empty storage, reefer services, maintenance and container refurbishment.

Chris Lawrenson, Managing Director, Pentalver, said: “The opening of our permanent facility at DP World London Gateway is a significant development in the strategic future of Pentalver. With phase one now officially open, the facility will play a key role in boosting our national service offering and fulfilling our obligation to respond to the needs of customers at UK locations of their choice.

“Throughout the development of our new premises we have enjoyed a fantastic working relationship with DP World London Gateway and look forward to working in partnership with them as our business grows and we enter the second phase of our development plans.”

Sultan Ahmed Bin Sulayem, Chairman of DP World, said: “We have been impressed by the efficiency and service provided by Pentalver and we are delighted that the permanent site is now ready for business.

“Being the closest deep-sea container port to two-thirds of the UK market, DP World London Gateway is already in a prime location. With the combination of the world class port with cutting edge technology, adjacent to what will become Europe’s largest logistics park, we are delivering new standards in efficiency and reliability. Since opening our landside operations, we have never stopped serving trucks due to bad weather; this is just one example of how we are setting new standards for supply chains.

“Pentalver provides important services to our customers and their commitment to opening a permanent base here emphasises the strategic importance of this port and its role in streamlining and de-risking supply chains.”

Pentalver began operations in 1980 and following three decades of investment and expansion is now regarded as one of the largest inland container logistics companies. The company employs over 600 people across five UK facilities (Southampton, Felixstowe, London Gateway, Tilbury and Cannock),

It operates over 200 articulated vehicles and handles 1 million TEU of containers each year. Pentalver supplies new and used containers for sale, including bespoke modifications; whilst its cargo management department offers end-to-end multimodal solutions by road, rail, sea and air, including ship and aircraft chartering.

Since 1999 Pentalver Container Sales has imported over 70,000 new containers for the self-storage market in addition to offering refurbished containers of various sizes and types. The company’s dedicated workshop team converts containers into offices, stables, workshops and numerous other bespoke applications including biomass boiler houses.

Located just 25 miles from Central London, with its superior operational systems and service, ensure ships load and unload as fast as possible, making London Gateway a world class asset for the UK.