Our website uses cookies so that we can provide a better service. Continue to use the site as normal if you're happy with this, or find out how to manage cookies.
X
You are here
> Media
> News Releases
> Port of Tilbury Restores Historical Landmark

The Port of Tilbury has invested £250,000 into restoring a historical landmark, which features prominently on the Thames skyline. The cupola, the ornate dome structure which can be seen atop the London Cruise Terminal at Tilbury, has been in situ since 1929 and has recently been taken down in order to perform essential restoration work. 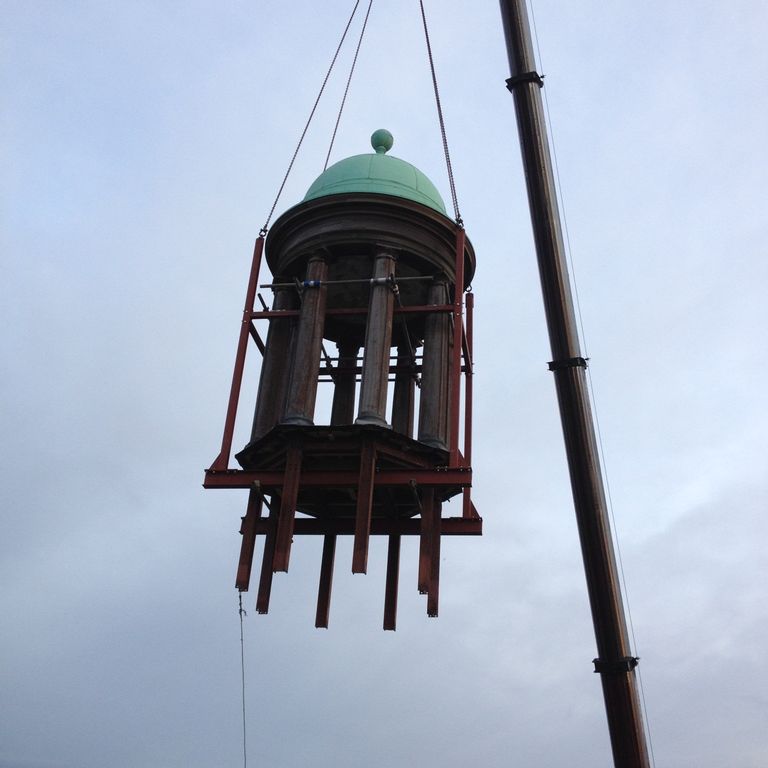 As the cupola is a listed landmark, which has been a distinctive part of the architecture at Tilbury for many years, the nature of the restoration is extremely delicate. At entirely their own expense, the Port of Tilbury have undertaken an extensive renovation project in order to preserve the cupola and prevent it from collapsing.


The projects, which is being carried out by the port in conjunction with Haydn Evans Consulting and J.W. Steele & Sons Ltd is set to take 14 weeks. Many materials are being custom built for the project, such as bricks which are being cut and designed to match those used during original construction of the cupola 84 years ago. Much of the steel frame has corroded and the expansion of the metal over the years has been placing pressure on the brickwork – both steel and brickwork now need to be replaced. Some of the wooden framework is also being replaced with sustainable Indian teak.
The cupola has a long and colourful history at the London Cruise Terminal. When the Empire Windrush sailed into Tilbury in 1948, the cupola was the first identifiable landmark to her 500 Jamaican passengers, wishing to start a new life in Britain. It was also the last piece of British architecture that the Ten Pound Poms would have seen before embarking on their life changing journey to Australia.

The London Cruise Terminal has also seen a number of famous visitors over the years, ranging from novelist George Orwell, to Cliff Richard to the Queen.

Jonathan Catton, Thurrock’s Heritage and Museum Officer said: “The cupola on top of the London Cruise Terminal is an extremely important piece of architectural history for Thurrock and the surrounding area. Many a historical event has taken place at the London Cruise Terminal since its opening in 1930 by Prime Minister J. Ramsay MacDonald and we are very grateful to the Port of Tilbury for investing such a great deal in restoring it.”

Perry Glading, Chief Operating Officer for Forth Ports Limited, owners of the London Cruise Terminal said: “It is of utmost importance for us to maintain the structural integrity and aesthetic façade of the cupola, which has sat proudly on top of our baggage hall at the Cruise Terminal for many years. We believe that it is entirely worthwhile investing in such a distinctive landmark which truly shapes the skyline of the Thames.”

Scaffolding in the Baggage Hall has restricted the circulation area causing some minor inconvenience but it will be business as usual over the next few weeks as Cruise & Maritime Voyages’ MARCO POLO moors alongside the London Cruise Terminal for Festive Parties and Christmas Mini-Cruises before sailing off for a 14-night cruise to Canaries and Madeira on Sunday 22nd December. Restoration work will be completed early in the New Year in readiness for a busy year with an increased number of cruise calls and Fred. Olsen returning to operate from Tilbury in the autumn.

Tilbury’s strategic position on the Thames provides a major geographical advantage for transport to and out of London and the South?East making its location the natural point for distribution. Serving the UK’s market for forest products, general cargo, vehicles, grain and other bulks, the port offers customers excellent transport links to and from the capital and across the South East.

The Port is a significant distribution centre, covering over 850 acres and is well positioned to access the M25 orbital motorway and the rest of the UK's national motorway network. In addition, there are direct rail connections within the Port, with access to the whole of the UK.

The Port offers:
• 34 operational Berths
• Over 16 independent working terminals
• Over 7.5 kilometres of quay
• Over 500,000 square metres of warehouse space
• Over 7 kms of road within port estate with excellent transport access
• London’s only Cruise Ship Terminal.

The Port is now recognised as Britain’s Greenest Port and has recently been nominated for a number of awards for the outstanding environmental initiatives which have been delivered over the past few years.

Forth Ports operates seven further ports ? Dundee on the River Tay and six ports on the Firth of Forth ? Leith, Grangemouth, Kirkcaldy, Methil, Burntisland and Rosyth. The Group also has significant property interests as well as a renewable energy division which is looking to gain planning approval for onshore wind installations and biomass facilities at a number of its ports in Scotland.

The London Cruise Terminal is a Grade II* Listed Building.