Our website uses cookies so that we can provide a better service. Continue to use the site as normal if you're happy with this, or find out how to manage cookies.
X
You are here
> Safety
> Son follows father into Thames pilot career

To mark Father’s Day (19 June), a father-son duo from Kent has been charting what inspires them both to work for the Port of London Authority (PLA) keeping the tidal river’s larger, visiting vessels safe. 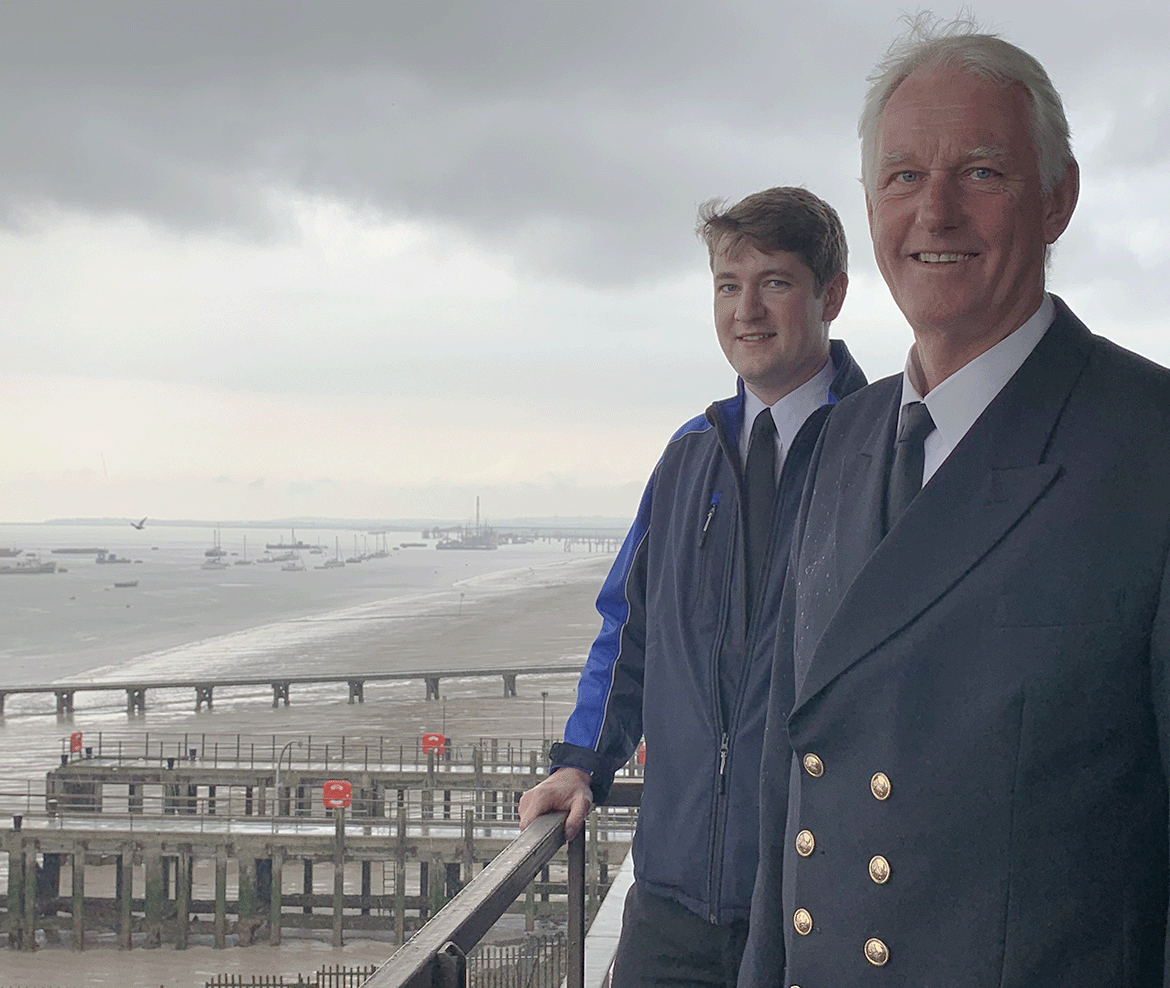 David (Dave) Hocking (right) and his son, also called David, are part of a 100-strong PLA team boarding ships mid-river - around the clock and in all weathers - to guide them in and out of the UK’s biggest port.

Following in the footsteps of his father three decades earlier, David junior joined the PLA as a trainee pilot in February 2022.

David senior, whose father ran an ice cream manufacturing company in Appledore in Devon and served with the Fleet Air Arm during the war, started his maritime career in 1975 as a deck cadet with Blue Star Line, trading around the world. He left in 1986 having qualified as a Master Mariner.

Recently married, he came ashore to work on the Bideford to Lundy Island supply ship, then as a pilot on the River Torridge, before moving up to Kent to further his career on the River Thames as a “sea” pilot.

Like his son thirty years later, this required him to travel way out into the estuary, to board ships negotiating the more-than-occasionally stormy waters of the Thames.

Now working as a “river” pilot, his focus is the more inland, narrower stretch of the river, between Gravesend and Putney Bridge, involving much shorter call-out times

He takes particular pride in his work supporting visits to London undertaken by naval vessels and other high-profile ships, for example during the 2012 London Olympics and celebrations marking the D Day landings.

Sea pilots’ shift patterns – which involve being on 24-hour rolling roster of nine days on and six days off - shaped much of the Hocking family’s life while the children were growing up in Pluckley.

David junior was 11 when he first shadowed his father on a job escorting a cruise ship into the centre of London, but opted to keep his career options till he had got ‘A’ levels in Maths, Physics and Geography under his belt.

His working life afloat started in 2010 as a Trinity House trainee deck cadet, gaining experience on vessels around the world, including passenger vessels and Caribbean banana boats, destined for Portsmouth.

On qualifying, he worked as a deck officer on aggregate dredgers around Europe, predominantly on the Thames.

The pair are united in their love of the River Thames.

David junior said: “A real perk of the job is seeing the river at its most beautiful, particularly at dawn and dusk, when all is quiet.

“The views make the early starts and irregular hours more than worth it.

“There is also a special camaraderie between the pilots who work on the river and the wider maritime community, which I really enjoy.”

David senior said: “A love for working on rivers in general, and especially the Thames, is often said to be in the blood.

“That certainly seems to be the case for my son, but I can highly recommend a career as a pilot to any young person thinking about what they want to do in life.”

Reflecting on the COVID-19 pandemic, David senior said: “The challenges of the last two years have been unprecedented in my lifetime.

“We are all proud to have sustained our keeping the capital, and the wider country supplied with key goods such as fuel, food and medical supplies.”

Since 2016, the PLA has recruited 79 new trainee pilots to ensure it can continue provide a robust service for customers, as demand on the river grows and older pilots retire. David Hocking junior is one of 14 new pilots being recruited this year.

Find out more about our Pilotage team