Our website uses cookies so that we can provide a better service. Continue to use the site as normal if you're happy with this, or find out how to manage cookies.
X
You are here
> Media
> News Releases
> Clipper Ventures race spectacular London start 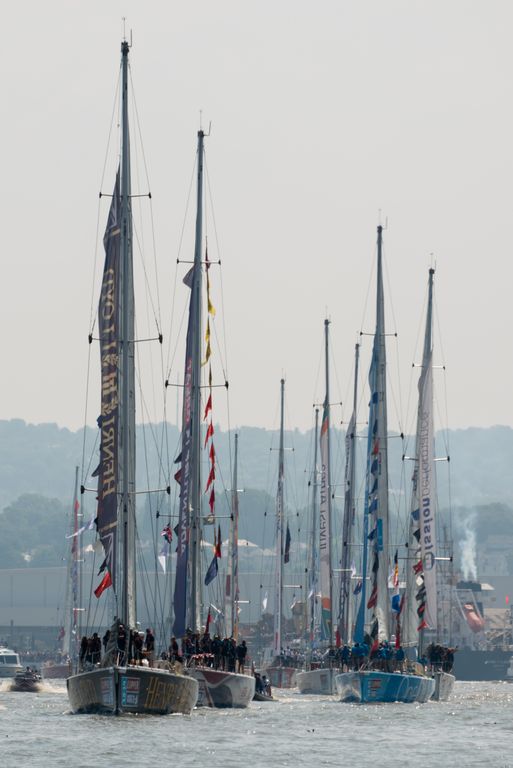 The countdown clock has reached the 60 days mark to the start of the tenth edition of the Clipper Race and crew excitement is mounting in anticipation of the departure from St Katharine Docks in front of Tower Bridge, London, on Sunday 30 August.

Race Director Justin Taylor has revealed details of a spectacular departure programme with a parade for all twelve teams going through Tower Bridge, twice.

The world’s longest ocean race will set sail from St Katharine Docks, central London’s only marina, which is our Official Race Start and Finish Port for the second consecutive time.

The fleet will arrive at the Marina on Friday afternoon 21 August, with the full fleet expected to be berthed by 1730 BST. The Race Village will open daily from 1100 to 1800 from Saturday 22 until Sunday 30 August, when the fleet departs.

The Race Village will feature a wide range of attractions and there will be a number of free open boats each day until Saturday 29 August.

On departure day, Sunday 30 August, the entertainment gets underway at 1100 with all crews taking the Centre Basin pontoon stage between 1300 and 1400.

“The fleet will slip from 1415 and parade in the Thames together with a flotilla of spectator boats,” explained Race Director Justin Taylor. “At 1530 Tower Bridge will open to let all twelve yachts enter the Upper Pool.

“The final parade down the Thames will start at 1600 when Tower Bridge opens again and the fleet makes its way out of London on its 11-month circumnavigation.”

Clipper Race founder and chairman Sir Robin Knox-Johnston commented on today’s announcement from his boat Grey Power, ahead of its start in the Transatlantic Race from the US to the UK.

Sir Robin said: “To be able to mark our tenth edition in another spectacular start from London on the Thames is great news. St Katharine Docks proved to be an excellent base for our race village and I’m pleased we can return there for this landmark series in the history of the Clipper Race which will celebrate its 20th anniversary next year.”

St Katharine Docks is the ideal location to introduce the race to Londoners. The picturesque waterside community of offices, shops, bars and restaurants offers an ideal day out in the heart of the capital. Visitors to the Clipper Race village in the docks will take in the spirit of adventure with a variety of free entertainment, open boat tours and attractions.

William Bowman, St Katharine Docks Marina Director commented: “St Katharine Docks is proud to once again be the Official Race Start and Finish Port of the remarkable Clipper Round the World Yacht Race. Whether you are a sailing enthusiast or someone who is simply intrigued by courageous human spirit, this is a truly inspiring and unique event taking part in the heart of London that shouldn’t be missed.”

130 crew members taking part are from London and some of them were present at St Katharine Docks to mark the 60 day countdown to Race Start. Amongst them is Blue Badge Tour Guide, Brian Harlock, a circumnavigator on Mission Performance who is giving up his day job to become a global tourist. He said: “I have been under Tower Bridge many, many times with tourists going backwards and forwards on the river doing a commentary, but having it open up for us will be fantastic. I didn’t know that would happen until today.

“I love my job and this city, but I was thinking ‘Is this what I’m going to do for the rest of my life?’ I wanted an adventure and this is it. I’m looking forward to completing our circumnavigation and sailing into St Katharine Docks this time next year, I am very proud of what we will have achieved.”

Noreen Rahman, a 32 year old maths teacher from London is sailing across the Atlantic Ocean in Leg 1 as part of the GREAT Britain crew. She wants to inspire people to challenge stereotypes. Noreen said: “I am a traditional, Muslim Pakistani woman and I want people to know that we do not have to be restricted by the bubble society has put us in. I want girls like those I teach every day, to know that the world is their oyster and they can take part in challenges like sailing across the oceans.

“Already at my school, more girls are interested in sailing now and coming from London I cannot believe that Tower Bridge is going to open for me to sail through it. It makes me emotional just thinking about it.”

A limited number of Spectator Boat tickets for Race Start are available here.