Our website uses cookies so that we can provide a better service. Continue to use the site as normal if you're happy with this, or find out how to manage cookies.
X
You are here
> Media
> News Releases
> Thames keeps half a million lorry trips off London roads

Thames keeps half a million lorry trips off London roads 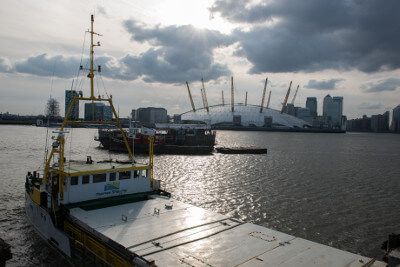 The continued growth of freight on the river Thames has kept more than half a million lorry trips off London’s roads in the past two years.

Latest figures from the Port of London Authority (PLA) show that the volume of cargo being moved between wharves on the Thames rose to 5.5 million tonnes in 2014, the fourth year in a row of tonnage growth. That’s a rise of 4% on the previous year’s total, 5.3 million tonnes.

“These latest figures are great news for London communities and the environment,” says PLA director of planning and environment James Trimmer. “Every 20 tonnes of cargo moved by boat keeps a lorry trip off the capital’s busy roads. So with over 10 million tonnes of material moved in the last two years that’s half a million truck trips saved.” 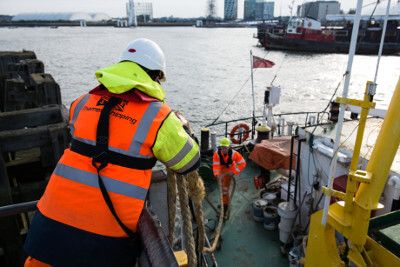 The booming construction market for new London homes, expanding businesses and transport schemes, is behind the latest growth in tonnage. Sand, gravel and other building materials are easily shifted by river to wharves along the Thames, where huge building projects continue. And the river has been key in moving waste out of the capital from major tunnelling projects such as Crossrail.

Over the past three years, Crossrail has moved three million tonnes of waste material from under London to Wallasea Island in Essex, where the RSPB is using the soil to create a nature reserve. That’s 1,528 shipments of spoil from London to Essex. At the same time concrete segments for lining Crossrail tunnels were shipped by river into London from a purpose-built factory in Chatham.

“What’s encouraging is how organisations behind these massive projects which produce so much spoil and need such large volumes of materials are turning to the Thames and showing what can be done. We’re optimistic for the future, with both the Northern Line extension project and £4.1 billion Thames Tideway Tunnel scheme committed to using the Thames,” concluded James Trimmer.