Our website uses cookies so that we can provide a better service. Continue to use the site as normal if you're happy with this, or find out how to manage cookies.
X
You are here
> Media
> News Releases
> Woman saved from drowning by Port of London Authority Crew

Woman saved from drowning by Port of London Authority Crew

A panicked dog walker who fell into the Thames while trying to rescue her beloved spaniel, had to be pulled out of the water by a passing Port of London Authority (PLA) crew. 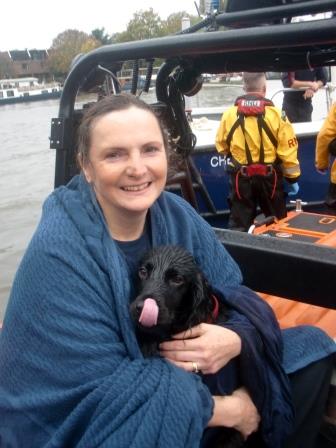 The 54-year-old woman slipped into the water near Kew Bridge, Kew, this morning (Friday, 6 November). Her cocker spaniel Sasha had somehow been knocked into the river by another dog and Sasha’s frantic owner fell in too as she tried to coax Sasha out.

Luckily, an eyewitness alerted the Coastguard and the PLA’s launch Tyburn, which was nearby and crew members were able to help the woman, from Richmond, out of the water.

Frank Hart, PLA Vessel Traffic Services Supervisor said: “When the Coastguard call came through, I realised we had two boats carrying out work nearby, so I offered to send the faster of the two.”

When the PLA team arrived on the scene the woman was up to her chest in water and holding onto the chains along the river bank, trying to keep from being swept away.

Joe Darby, one of the three members of the PLA team on the Tyburn, which pulled the woman out said: “The woman appeared cold and a bit shocked when we arrived.

“The Thames can be unforgiving. If your dog goes in the water and can’t get out, it’s always best to call 999 and alert the Coastguard.”

The uninjured woman was transferred to a Chiswick RNLI Lifeboat to be looked after. She expressed her surprise at the strength of the tidal river and just how cold it was.