Our website uses cookies so that we can provide a better service. Continue to use the site as normal if you're happy with this, or find out how to manage cookies.
X
You are here
> News Releases
> The Thames Today

1. The River Thames is 215 miles long; its source is generally recognised to be at Trewsbury Mead, Gloucestershire in the Cotswolds, west of London.

2. At Teddington Lock, west London, the Thames changes into a tidal river, with two tides day and water levels rising and falling by as much as 7 metres.

3. You can cross the tidal river by any one of 30 bridges (nine are rail and four foot), three ferries (one is car and two pedestrian), 20 tunnels (three are road, 11 tube, two DLR, one channel tunnel rail link and three foot).

4. The power of the river is so great that it carries around 20,000 tonnes of sediment per tide but much of it is carried back on the following tide so the net effect is small. 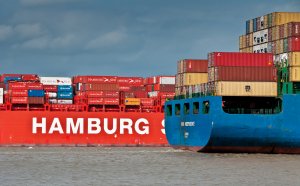 The tidal Thames welcomes over 10,000 large vessels every year

6. The Port of London is the UK’s second largest port, handling more than 40 million tonnes of cargo a year from food and fuel to cars and engines, sand and gravel to containers and timber.

7. The tidal Thames is the UK’s busiest inland waterway for freight. Over five million tonnes of materials are moved on the river every year, keeping more than 265,000 lorries off London’s busy road network.

8. The Tideway Tunnel Tunnel project is set to use the river to materials to and from the construction sites along the river; Crossrail used it to take tunnelling spoil out of the capital and deliver concrete tunnel linings.

9. The port has trade connections with over 80 countries round the world and generates employment for over 45,000 people.

10. Increasing numbers of passengers are travelling on the river. In 2013, there were more than eight millions passenger trips on the river; the Mayor has a target of over 12 million passenger journeys a years by 2020.

11. The tidal Thames hosts the annual Oxford and Cambridge university boat race and is the crucible of British rowing talent, with many rowing clubs lining the river.

12. The tidal Thames is attracting investment of almost £2.5 billion including the expansion at the Port of Tilbury, investment in new passenger vessels and piers, plus the development of the London Gateway container port.

14. The tidal Thames is home to over 120 fish species, including the salmon which is gradually making a come-back.

15. In the outer estuary the harbour porpoise, the occasional bottlenose dolphin and two species of seal are seen.  Every year the muddy foreshore of the lower river and the estuary attract large populations of overwintering birds.

16. The river carries around 300,000 tonnes of sediment every year depositing most of it on the ever-shifting mudbanks of the estuary.

17. The power of the river’s flow is so great that the bed of the main channel of the Thames rarely needs to be dredged.

18. In recent times the Thames Path has been linked up to make it the longest riverside walk in Europe which is 184 miles (296 km) from source to the mouth of the estuary.